These are the last of my pictures from... 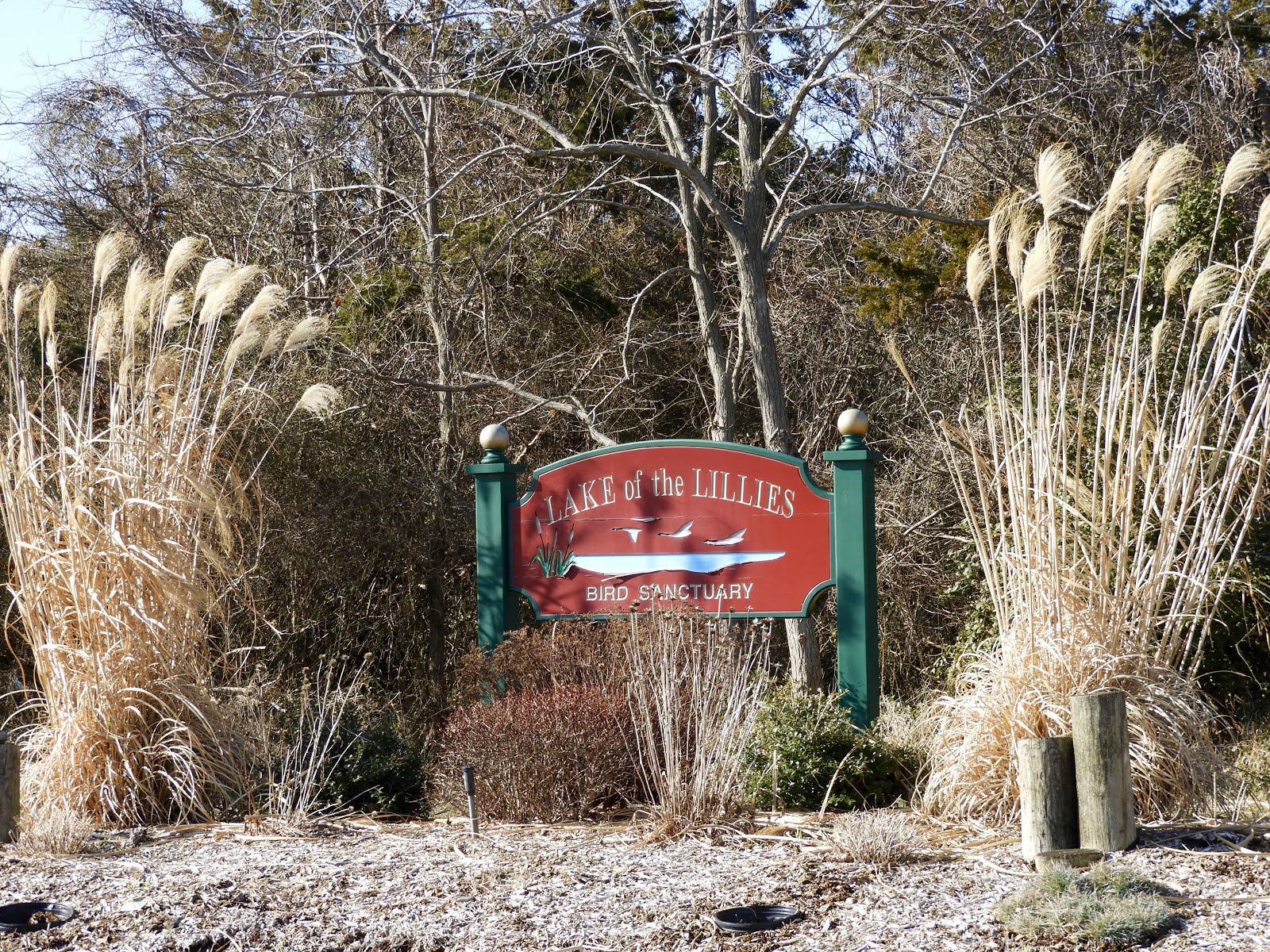 Lake of the Lilies 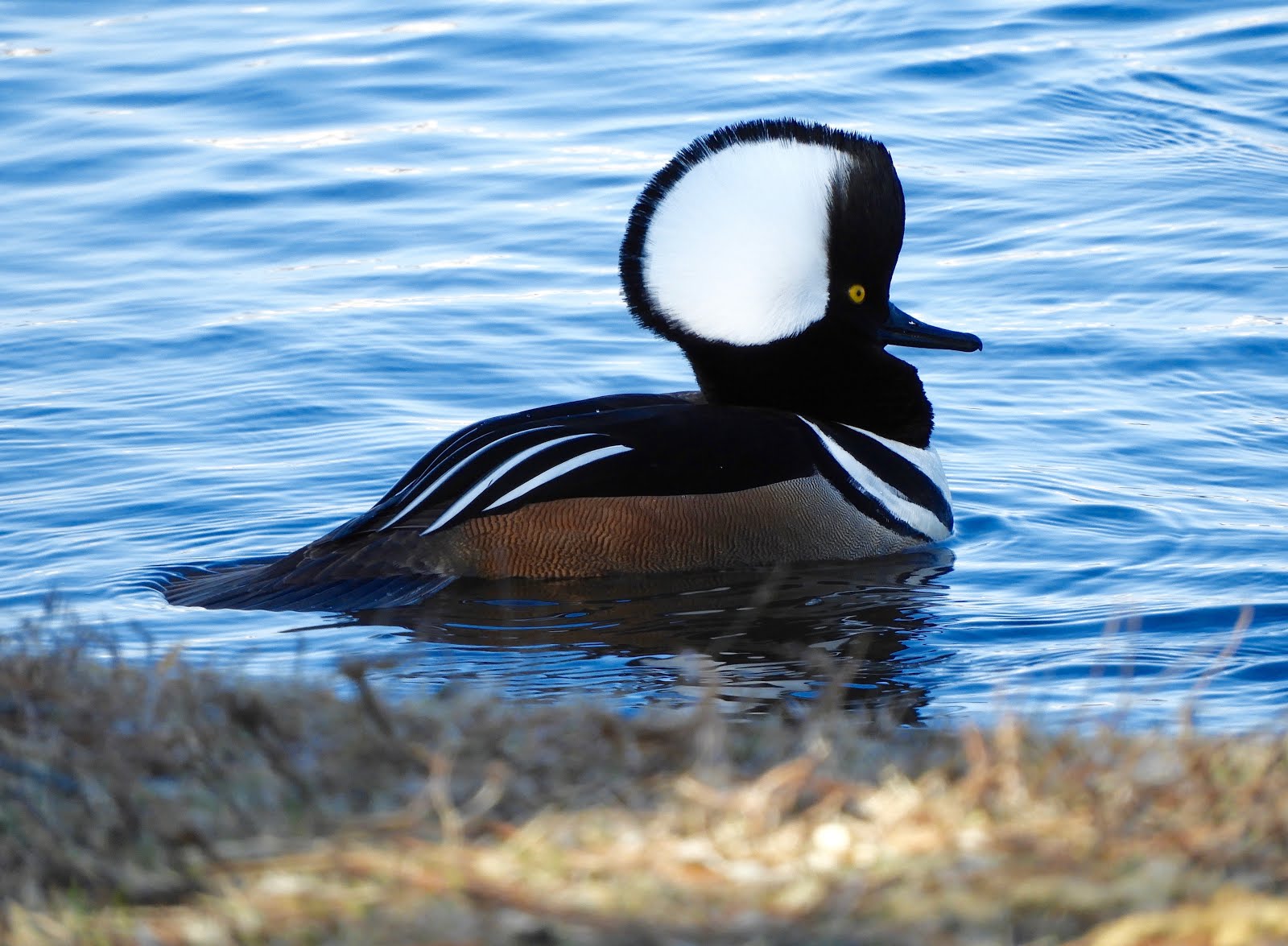 The Hooded Mergansers
Hang out here over the winter and
I was surprised to see one hugging the shoreline...
they usually hangout and swim in the middle of the lake,
making it difficult to photograph them. 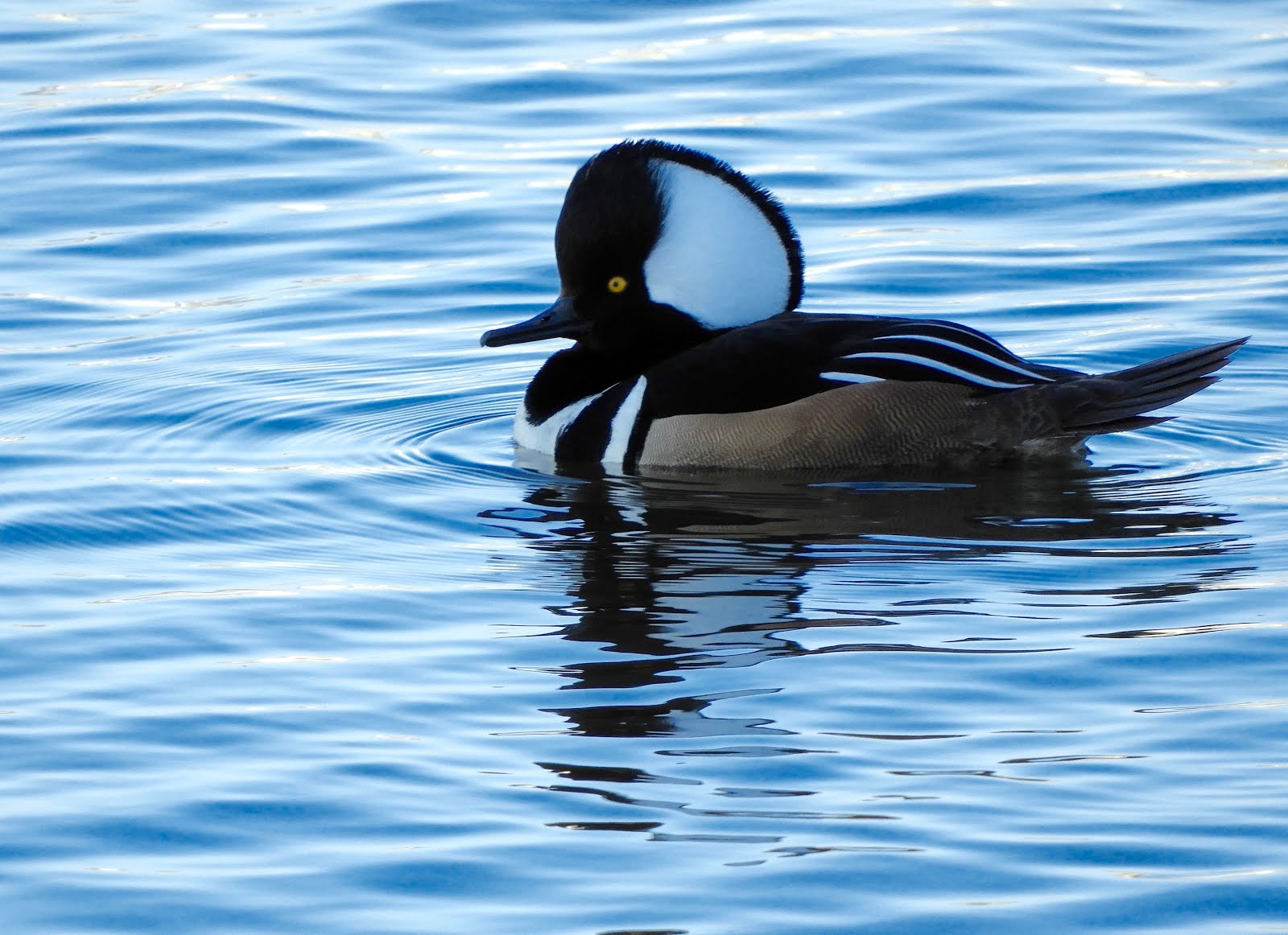 The lighting was not good, but I was happy to see them so close. 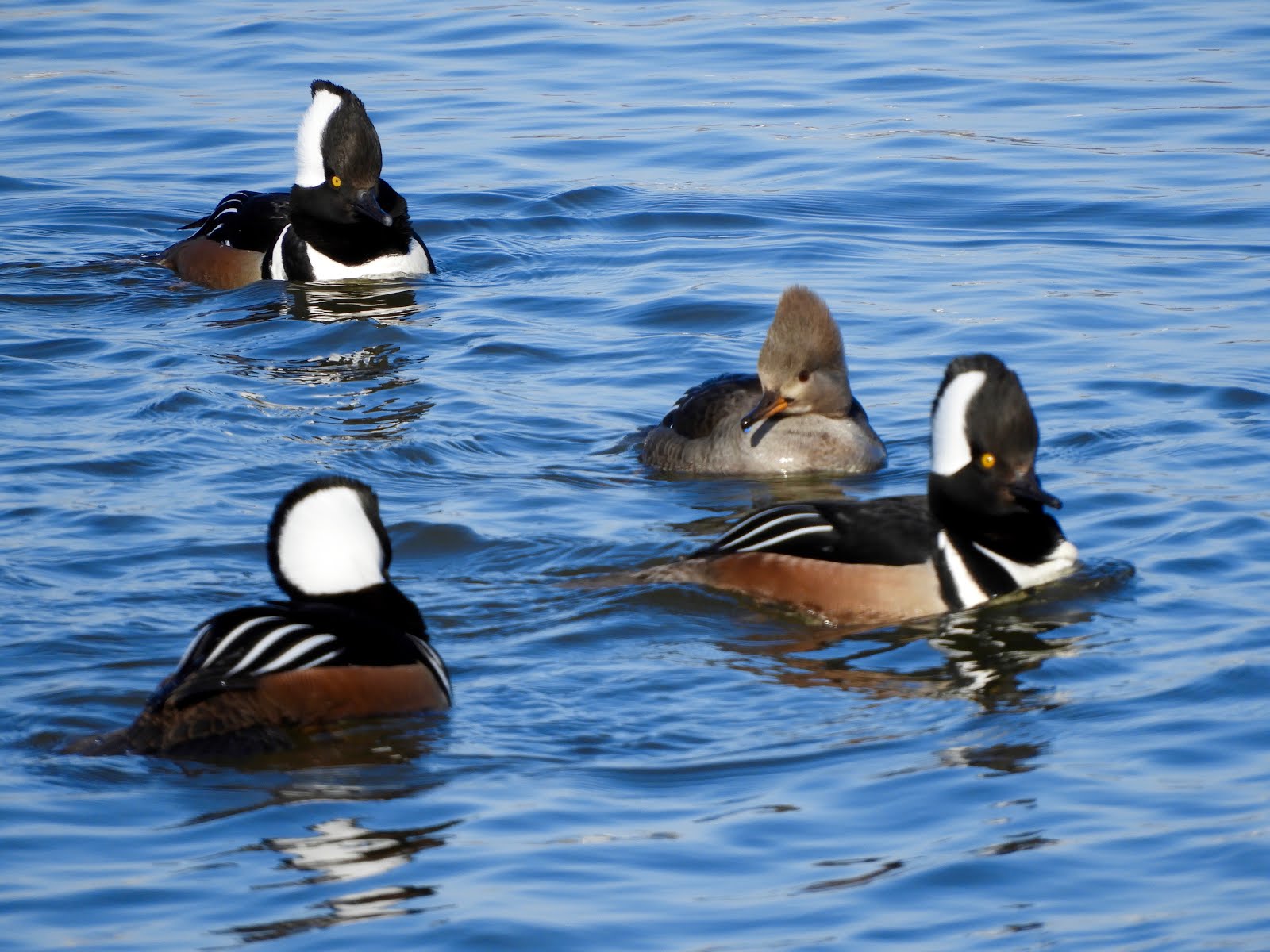 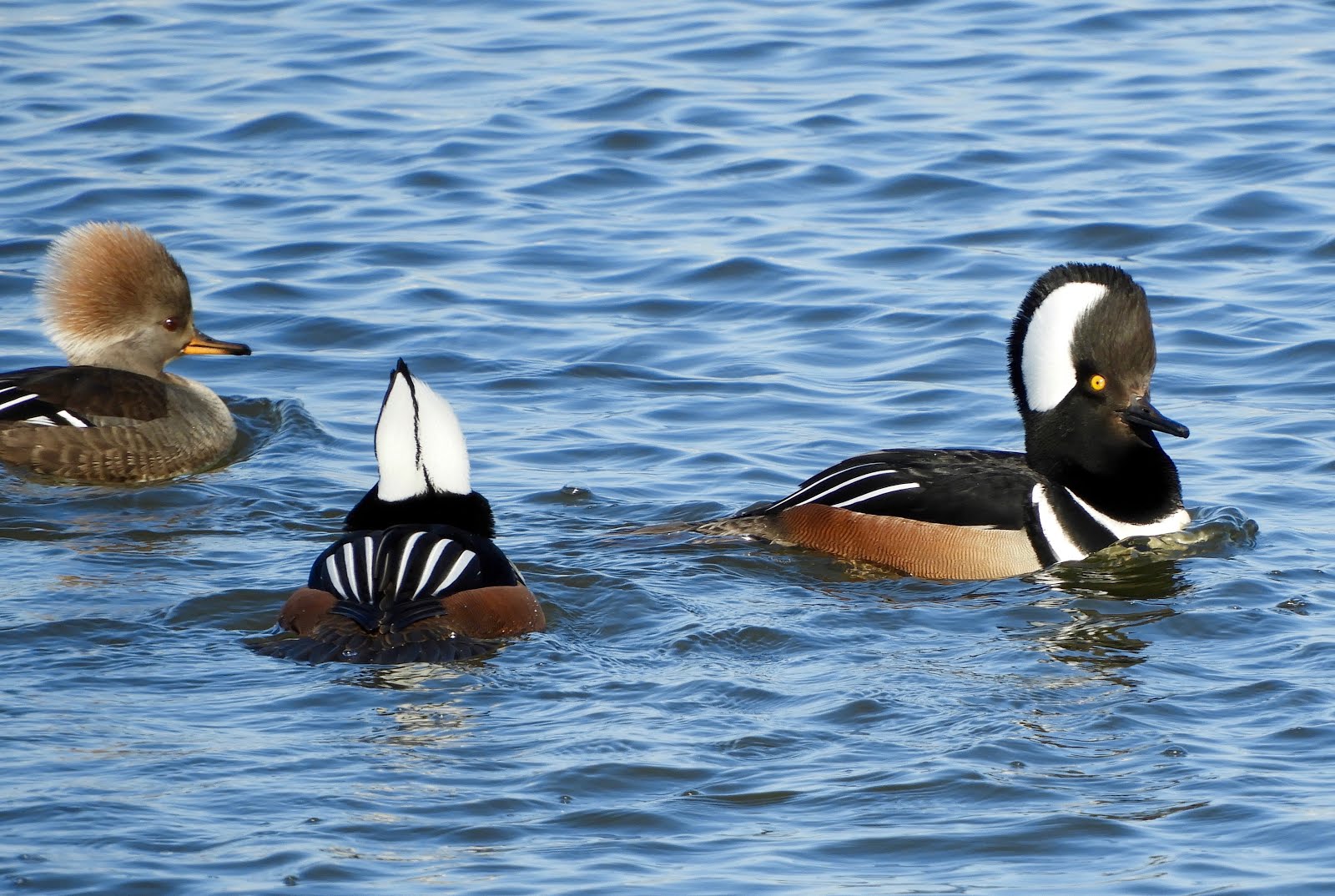 I only saw a few girls in the lake,
on the left here you get a good idea of how she looks with her hood up. 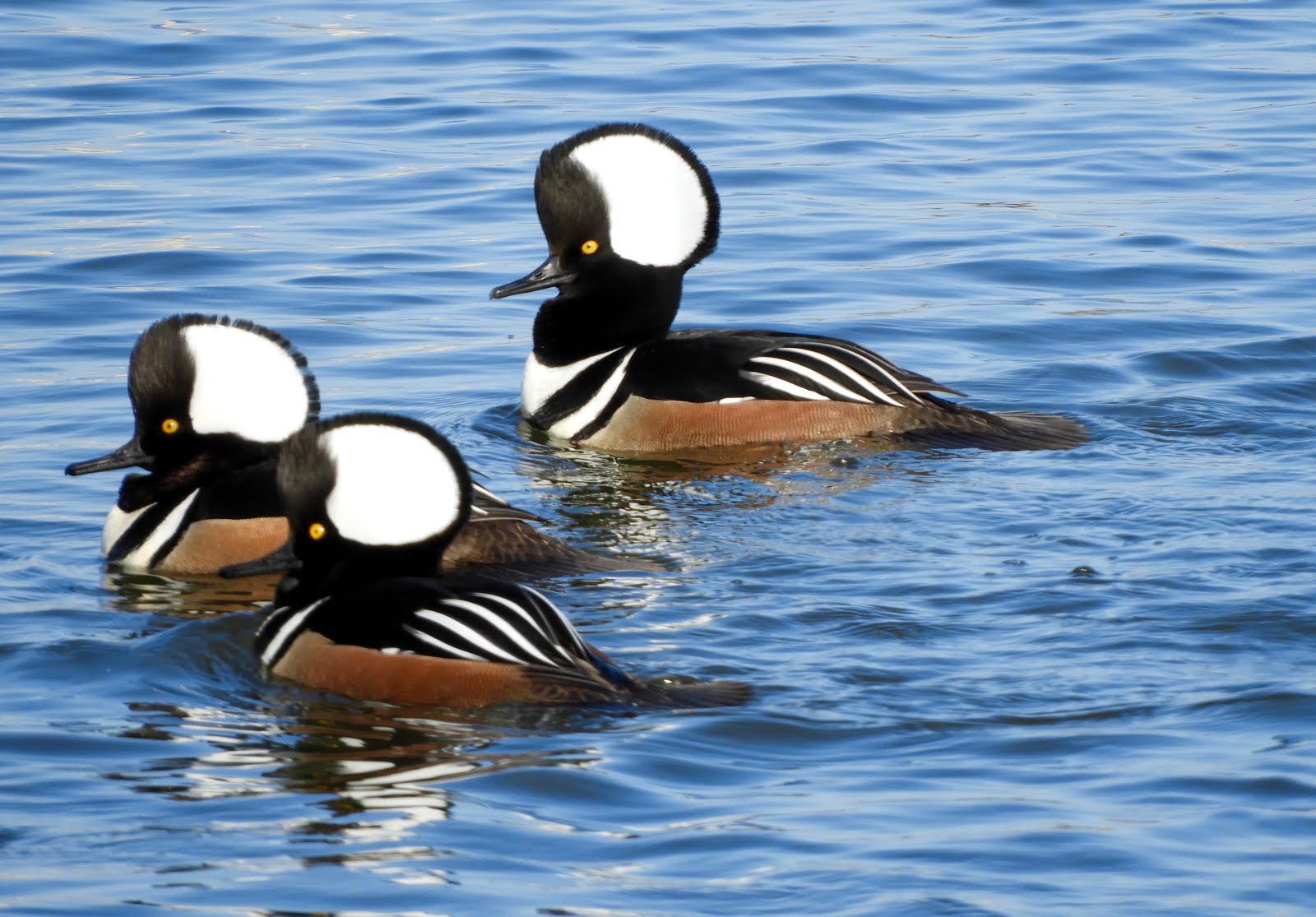 The Hooded Merganser is a smaller duck, by comparison.
The hood or crest on their head, which is up here, is collapsible.
It likens a fan. 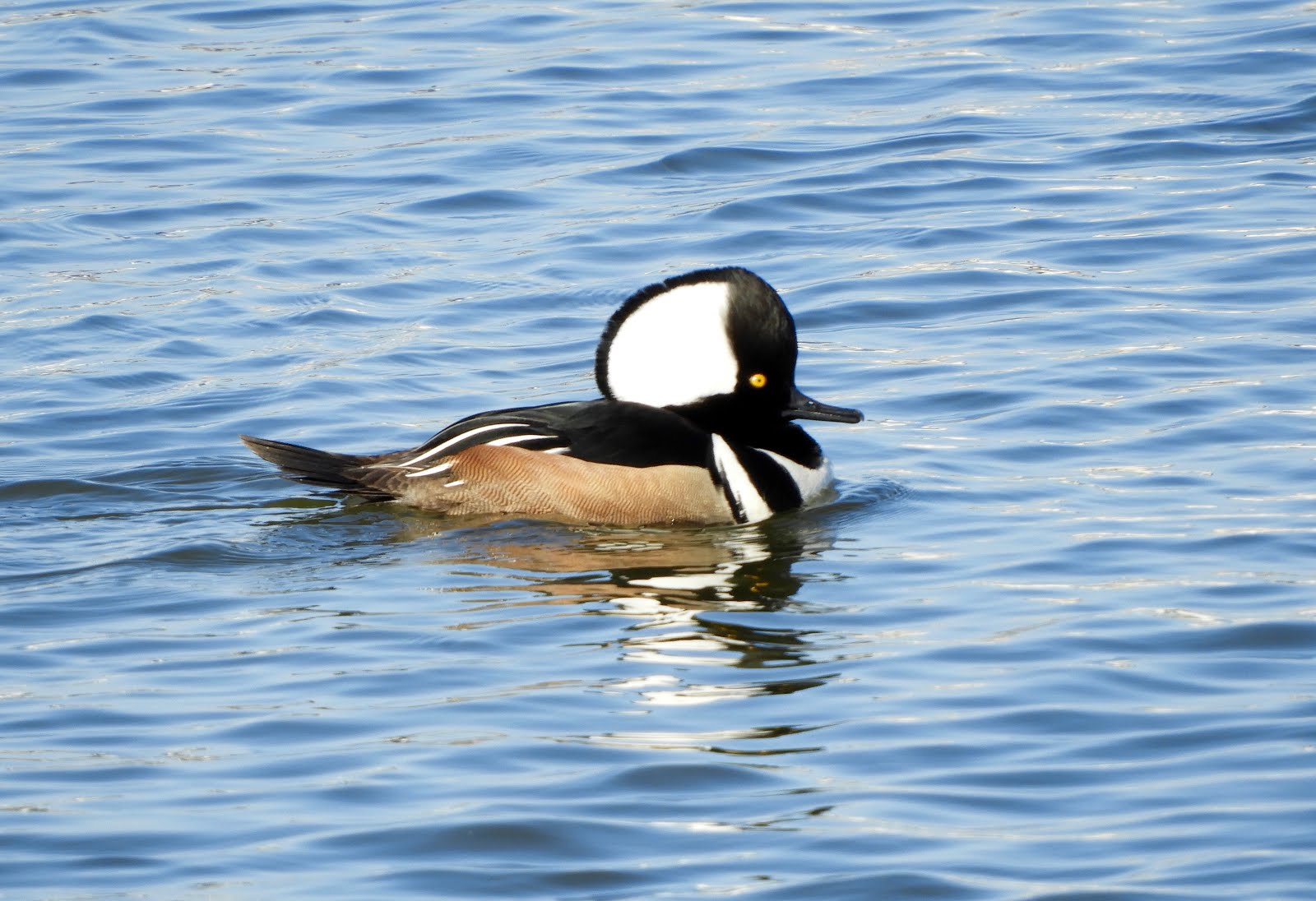 They have a small thin bill,
In flight the wings are thin and the tail is relatively long and round shaped. 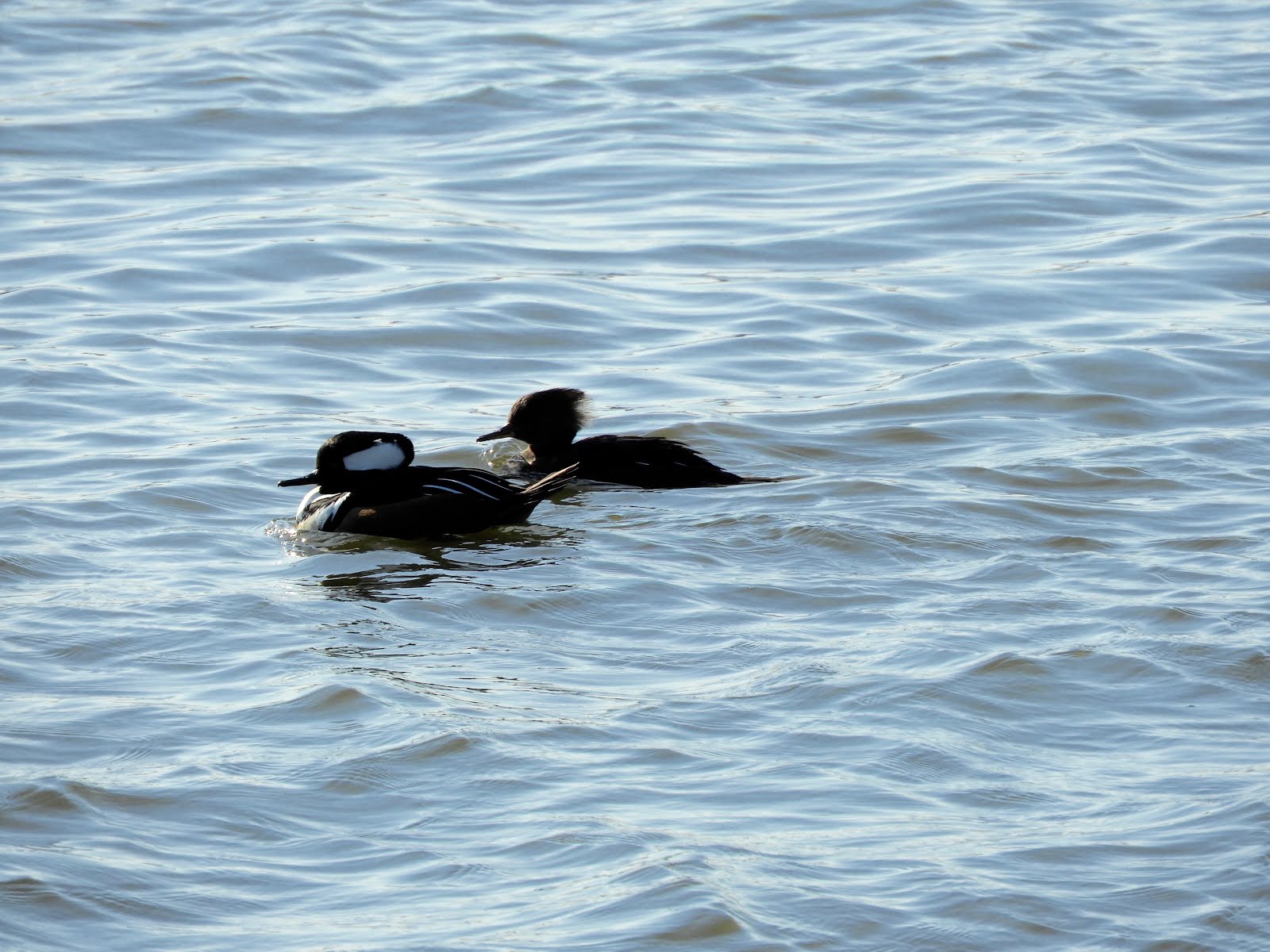 These two were on the other end of the lake,
not too far out, they were alone.
One male, one female they were very tiny. 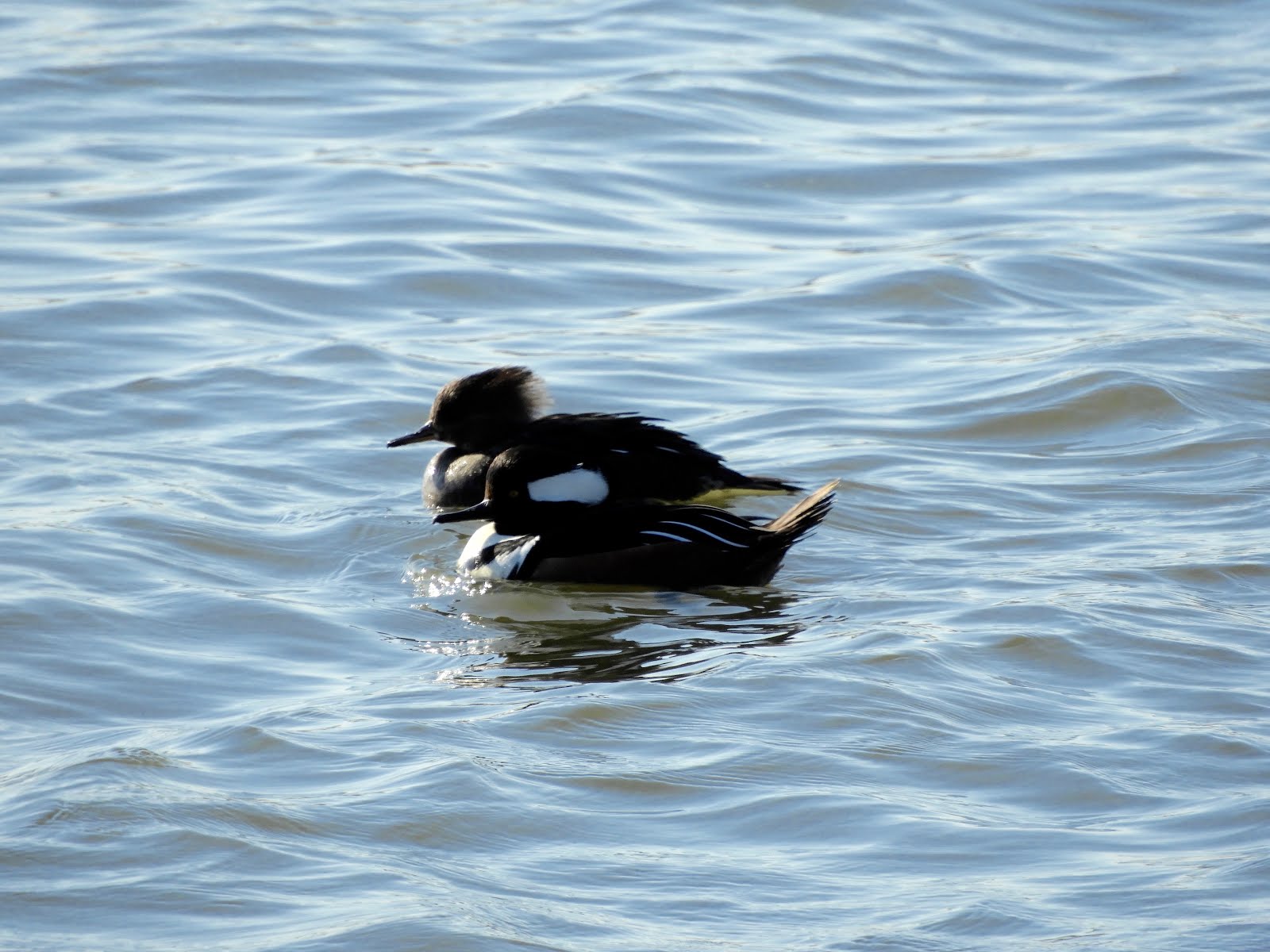 They stayed together the entire time I was there, they looked to be youngin's! 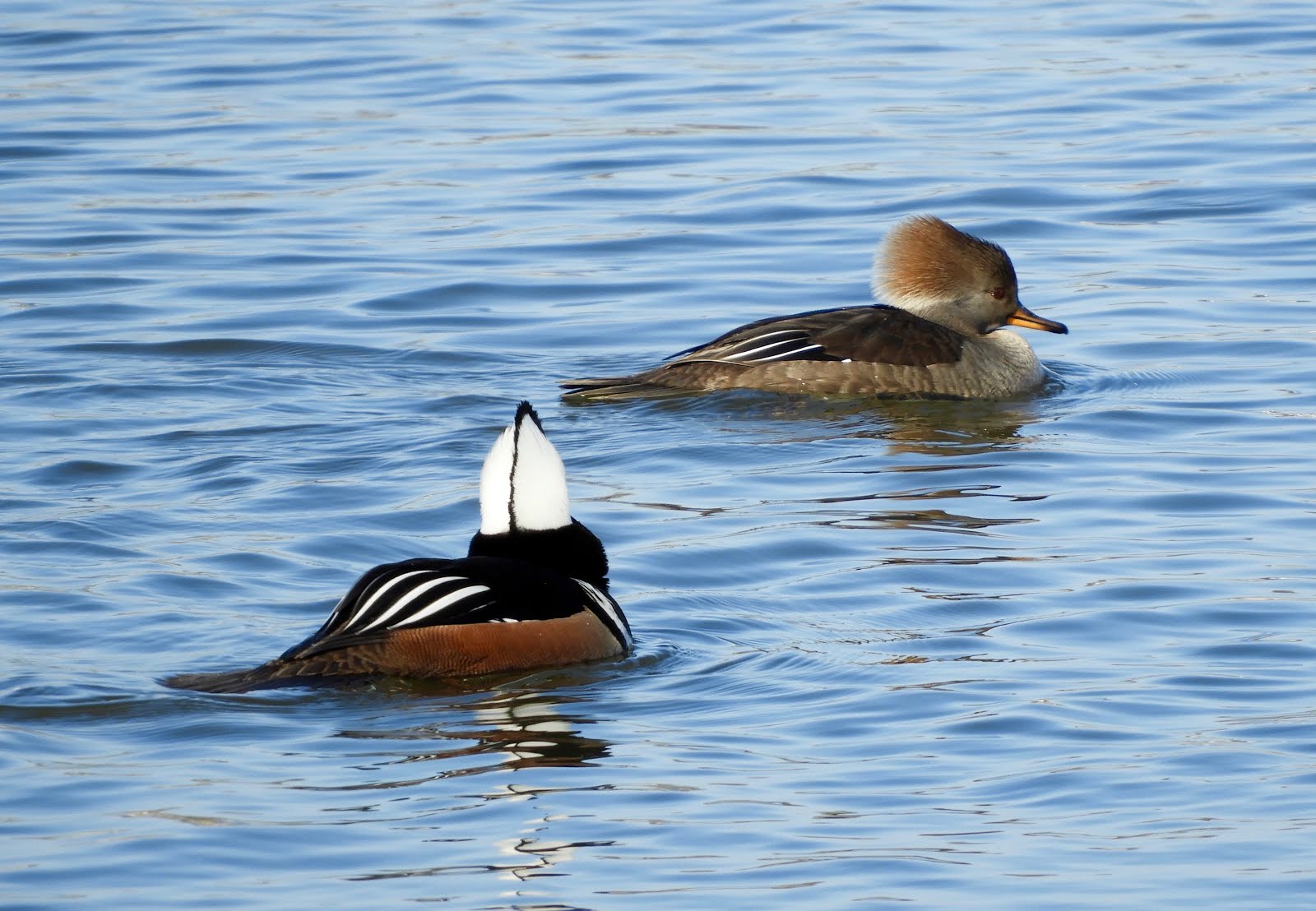 A nice view of a female. 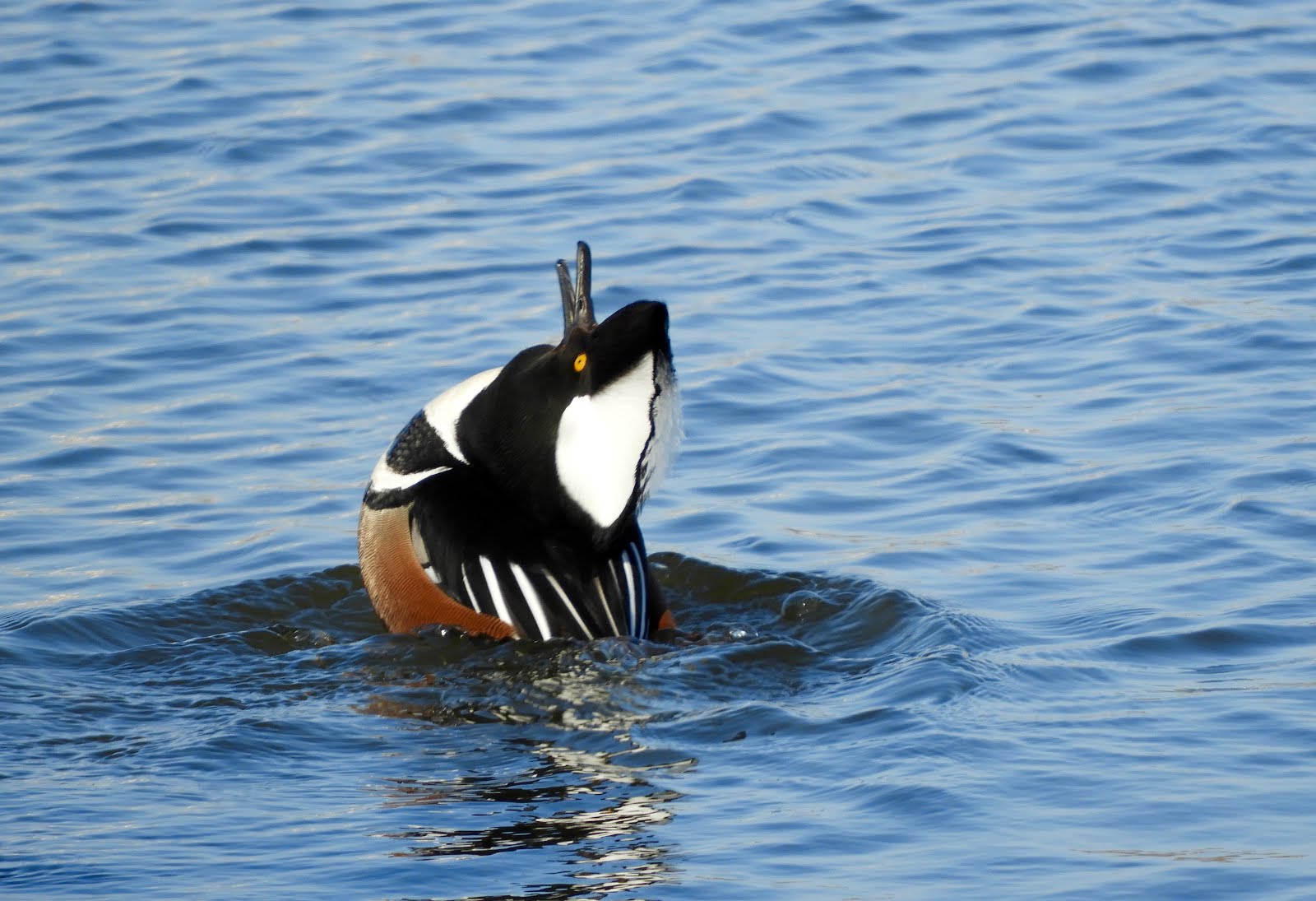 They are diving ducks but the entire time I was there, they kept doing this.
Coming out of the water, arching backward, their bill facing upward,
you can see that behavior in this picture.

They were so fun to watch!

Eileen at Viewing Nature With Eileen

Oh these photos are awesome as usual. I love the diving ducks. I am sure this was so much fun to watch live. Hug B

Gorgeous shots of these beautiful birds! How fortunate you were to be so close to them, Debbie! I wonder is that behaviour you show a courting ritual as they look to pair with one of those females?

Such gorgeous birds, I always enjoy seeing your pictures.

They are spiffy looking ducks.

The eager ducks are beautiful in their colors. The last photo is great. Regards.

wow, those are some freaky looking dudes, huh. Great shots.

Looks to me like those boys were trying hard to impress the females.The last picture is a typical courting display.Amazing shots,Debbie.

Hello Debbie, fantastic captures of the Hooded Marganser. They are beautiful ducks, one of my favorites too. Thanks so much for linking up and sharing your post. Happy Saturday, enjoy your weekend!

Great photos of the mergansers! I've never seen this type of duck before, they're just amazing-looking little creatures.

These are fantastic! You were there at the right time! I've never been able to get a fraction of that close to mergansers.

I have never, ever, seen a duck that looks like that! They are fascinating!

They are such unusual ducks! And you saw so many beautiful males together. What a great sighting! Enjoy your day!

LOVE the name of the lake! LOVE the hooded mergansers! Great photos!

These have always been so interesting to me! I had no idea that the hood could collapse. That last picture just gave me the giggles!

Stunning pictures Debbie == they are wonderful ducks ... I love how you caught and documented their behavior. I've never seen so many at once and only once one was up close. That was an amazing Lake!!

Beautiful shots! Lucky you to have been able to capture their antics.

Stunning shots! You captured the coloring so well ... I felt I was there on the shore. Those girls have quite the hairdo, but I like that of the males even better!

On these are spectacular shots. What a beautiful bird they are. I loved learning about them. I am always fascinated by the difference between the males and females. You captured such a great shot of the fluffy little head of the female. All the photos were awesome!
I love your nature shots! Blessings and hugs~