I have been periodically checking in on an Osprey Nest in Spring Lake Heights.
The nest is pretty easy to see and getting pictures of the birds is not too challenging.
Unlike many birds, both sexes of Osprey are similar in appearance.
The female is larger, up to 20% larger than the male and she is a heftier bird.
The females also have more brown coloring on their chests.

The first three pictures were taken on June 18th. 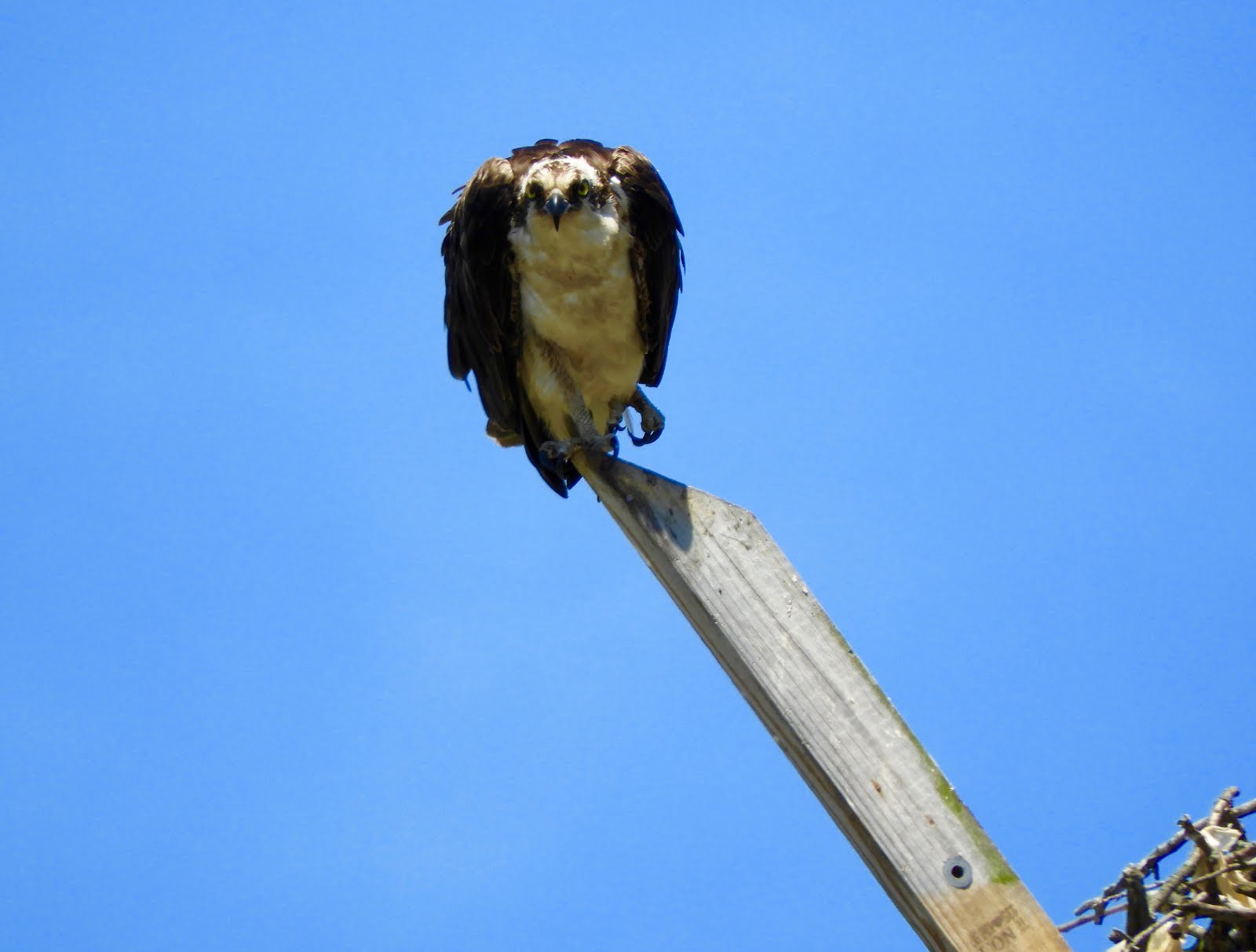 This appears to be a female. 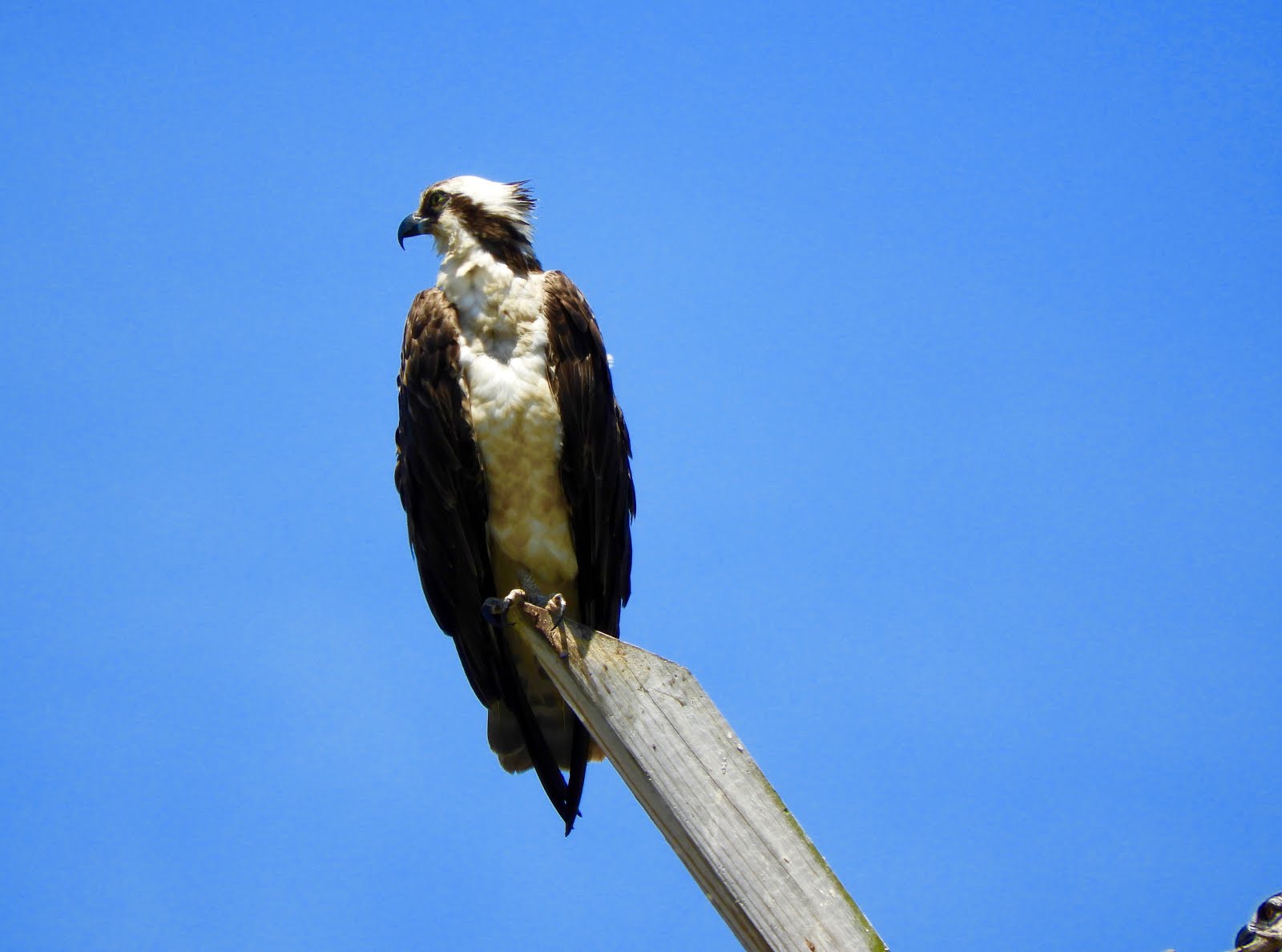 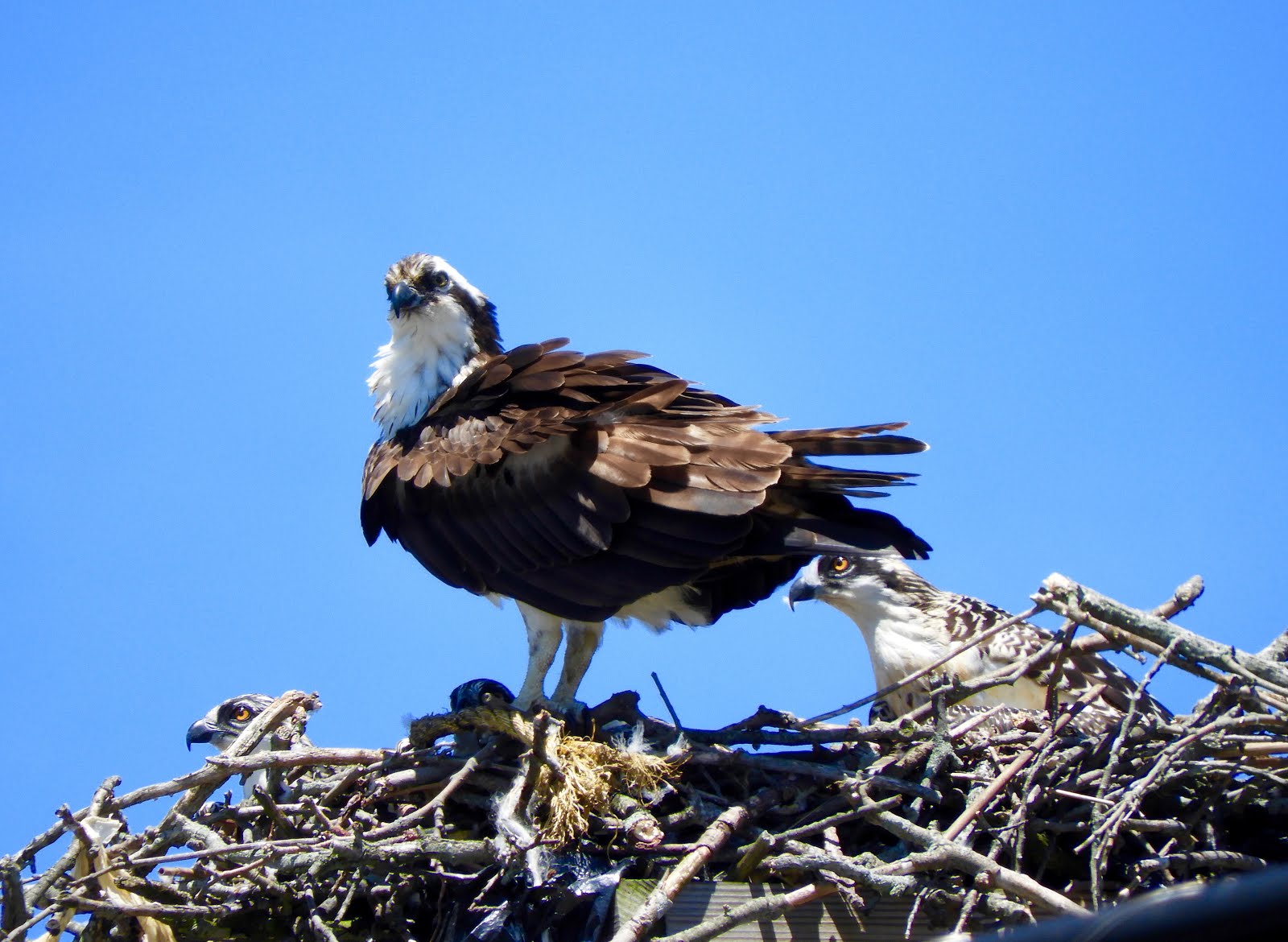 There are three young Osprey in the nest...you can "almost" see all three in this picture.

The next two were taken on June 21st 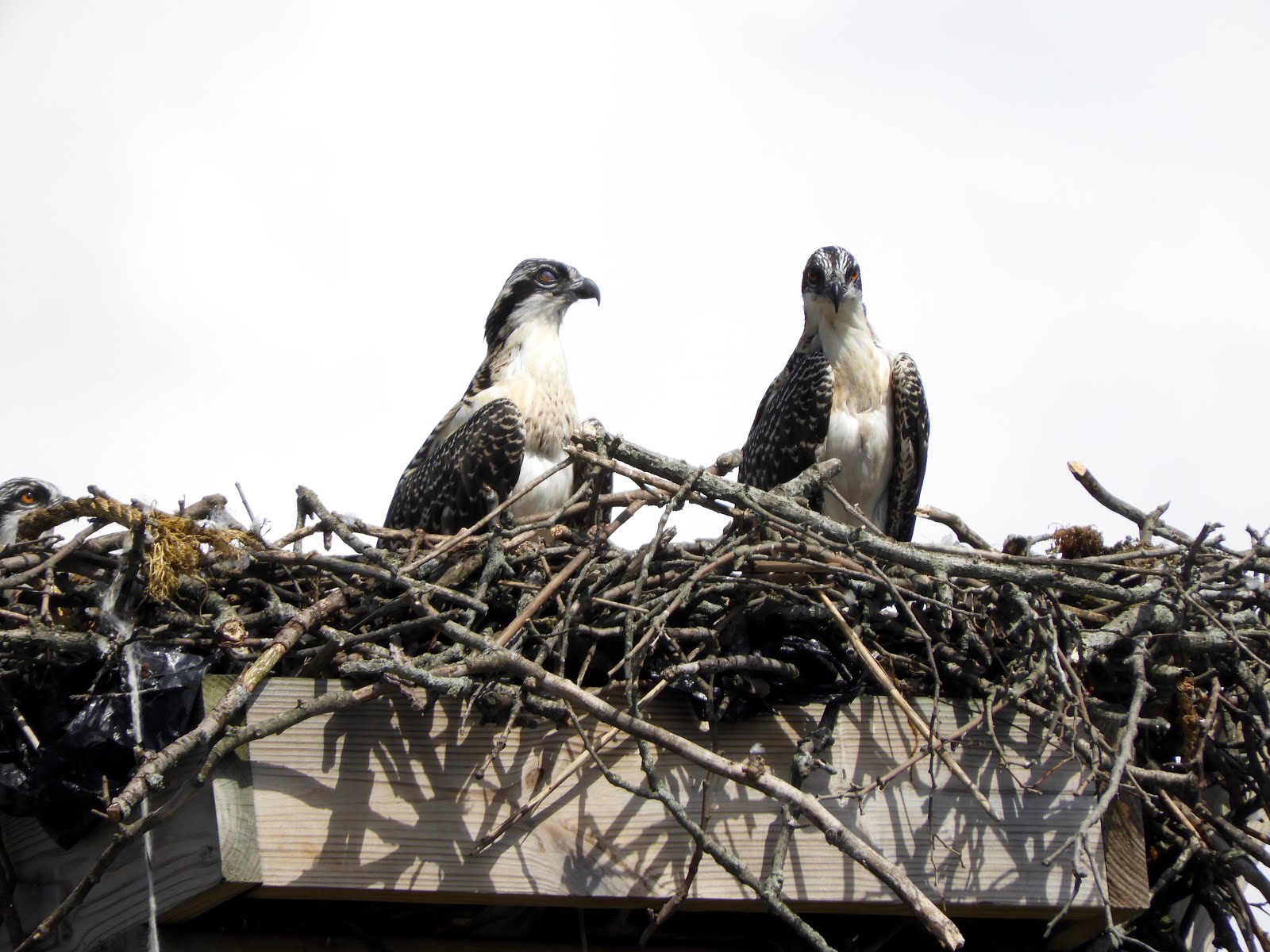 Every time we have visited, the parents are on the out skirts, the babies are in the nest. 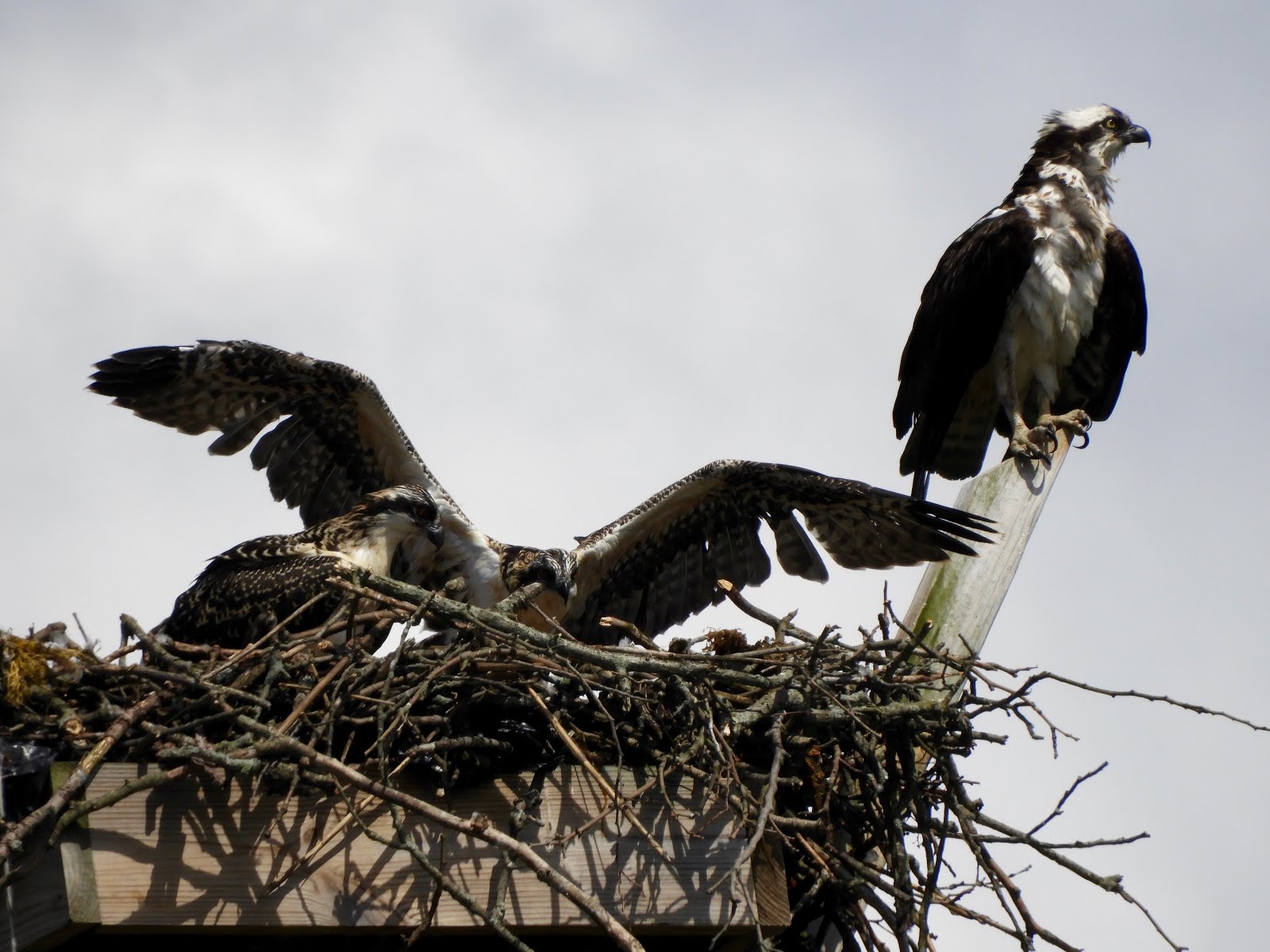 This is a young one, spreading it's wings.

The next 2 pictures were taken on June 25th. 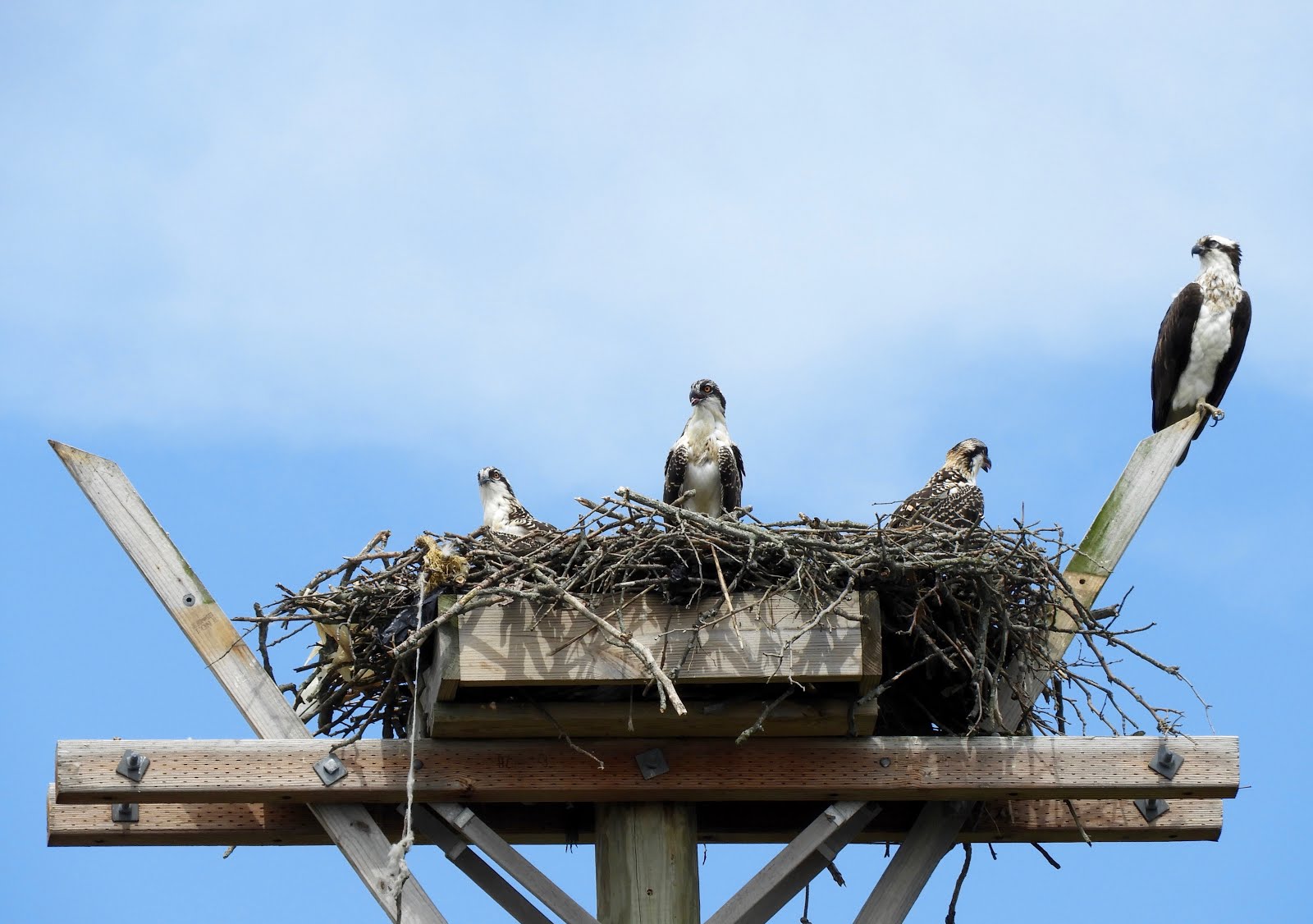 I think this is a male to the extreme right, a males bib is lighter/whiter in color.
The three in the nest are the babies, they are getting big! 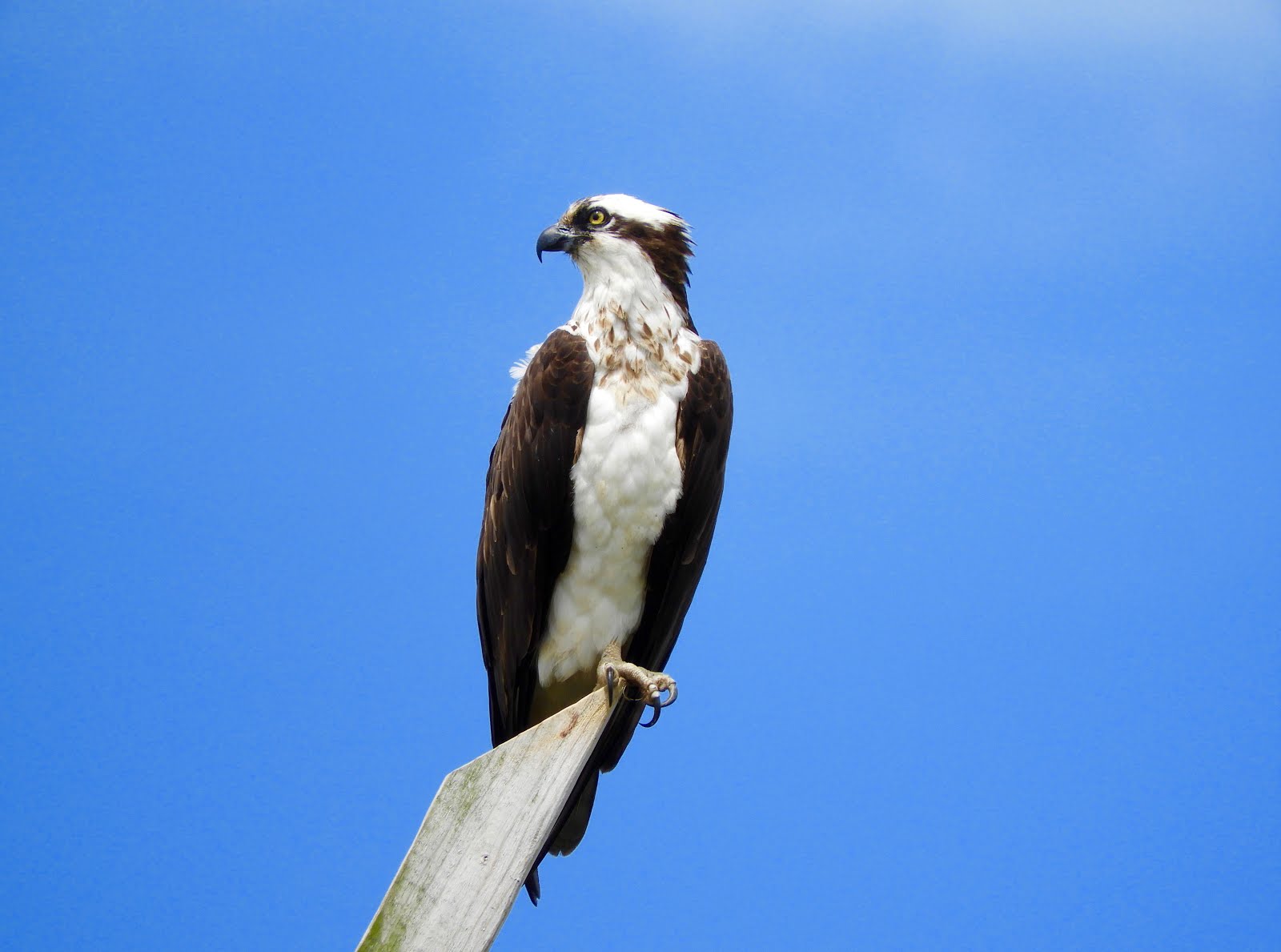 Osprey generally live about 10 years but can live for as long as 20.
Osprey will usually return to the same nest each year.
If you observe two birds on a nest early in the season,
it is probably the same couple returning to the same nest structure.
Osprey pairs are monogamous and often mate for life. 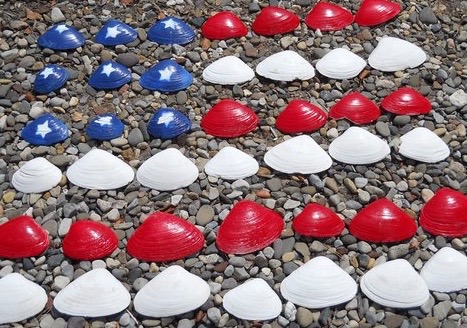 Happy Independence from the Jersey Shore!

Love the shell flag Debbie. Those babies grew a lot in a short time. We have noticed how quickly the baby bird we out of their nest around our yard this year. I guess we were more observant.:) Blessings for a sweet 4th for you and your hubby. xoxo, Susie

Awesome post and Osprey photos. It is cool seeing 3 young Osprey on the nest and the parents nearby. The shell flag is pretty. Thank you for linking up and sharing your post. Happy 4th of July! Enjoy your day, have a great weekend! PS, thank you for the visit and comment.

Wonderful photos of the Ospreys!
Happy 4th of July!

How fun to watch them with their babies. Cute idea with the shells:)

Wow, awesome shots of them Debbie!

Wonderful shots of these guys! Have a safe but fun holiday!

Beautiful Osprey shots. i have never been fortunate enough to see a nest.

Happy 4th of July!
Beautiful captures of the Osprey family!

They really are remarkable birds and your pictures are fantastic.
Happy Independence Day.

We have several osprey nests on old dead snags protruding out of the lake where we have our float cabin. I haven't been home yet to see if they are nesting. - Margy

Great photos! We had a pair that kept nesting on an electric pole near Lake Pactola. Game, Fish, and Parks built them a nice platform and they happily moved.

Wonderful photographs of the Ospreys.
Love your shell flag.
Happy 4th of July.

Those are awesome photos! How fortunate to have a nest you can easily visit! I'm guessing the young ones will be gone soon. I've seen single ospreys, but never a pair or a nest.

Happy forth of July to you too. These photos are just proof this land is my land and I'm here to defend it! Living life, one day at a time.

How cool to see how they have done over time, it's amazing how fast they can grow isn't it, wonderful family pics you have got there, just terrific. Love the patriotic shells too!

oh my gosh Debbie you got some GREAT OSPREY pictures here, I love them! I've got a few over the years myself but not this many. Hope your 4th of july was real nice. Except for walks, we didn't really go anywhere or do anything. Mr. Front porch grilled us hamburgers and dogs on the grill. Mercy, the loud fireworks are STILL GOING all around here and it's like 2 am the next day, is it like that where you live?

ps...thanks--i will look up the Falcon movie!! did you see the youtube of the OSPREY CARRYING THE LITTLE SHARK over myrtle beach this weekend????!!! well I hope he didn't drop it on anybody!! LOL They are saying it's a shark, but now people are saying it's just a big fish, haha.

The babies are growing up right before your (and our) eyes! Love this series. The adult Ospreys have the most remarkable thousand-yard stare! Great captures.

I loved the photos of the Osprey. I think it is so interesting how the male and female differ. I think it is interesting that the female is larger than the male. I like how they mate for life and come back to the same nest.The photos of the babies are awesome. I love how our Heavenly Father cares far and had given us all these birds and etc. to enjoy as part of his creations.
Sending loving thoughts and hugs your way!