Our Adventure in Smithville

The weekend was awesome...filled with all my favorite things!! 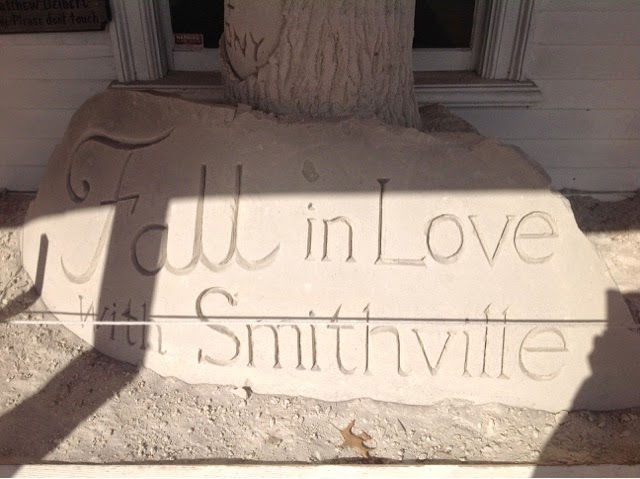 We started out in Historic Smithville, NJ,
pictured here is a sand sculpture
that greets you at the entrance of The Smithville Inn.
We had our lunch there. 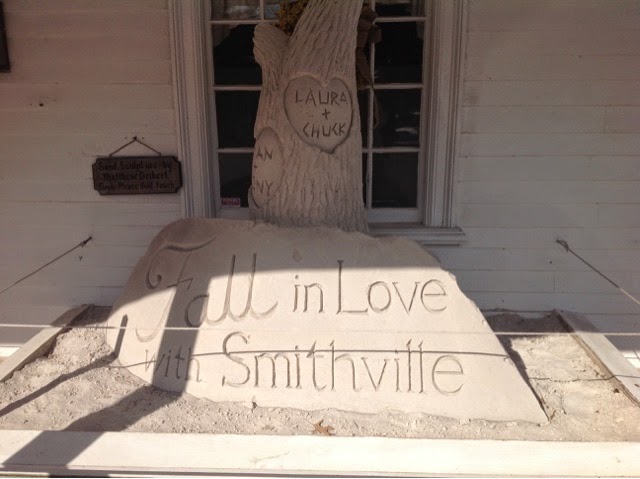 It was so funny that Chuck's name was carved in the sand...
I knew my name should be with it.
They were hosting a bridal shower, lucky
Laura was marrying Chuck. 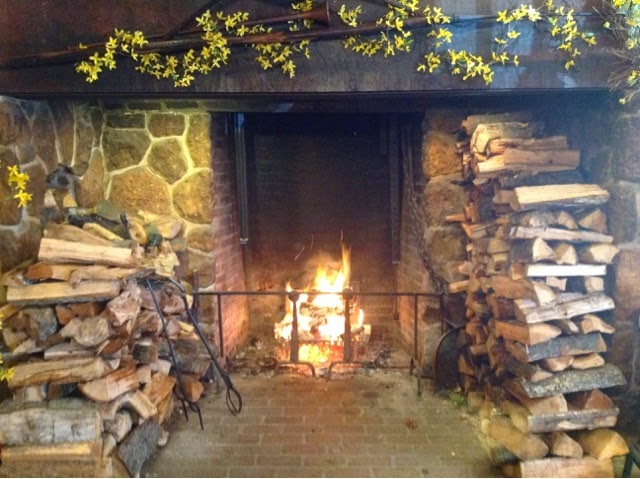 The fireplace had a roaring, warm fire and we were seated immediately.

Lunch was very good...but the desserts were picture worthy. 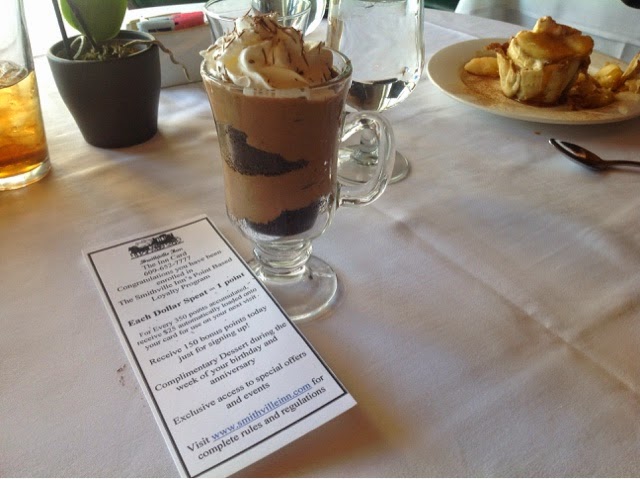 Hers...Chocolate Mousse, touch of kahlua, oreo cookie crust,
topped with luscious flavored whipped cream,
and chocolate shavings.
This was so creamy, so divine, I was so glad I choose it!! 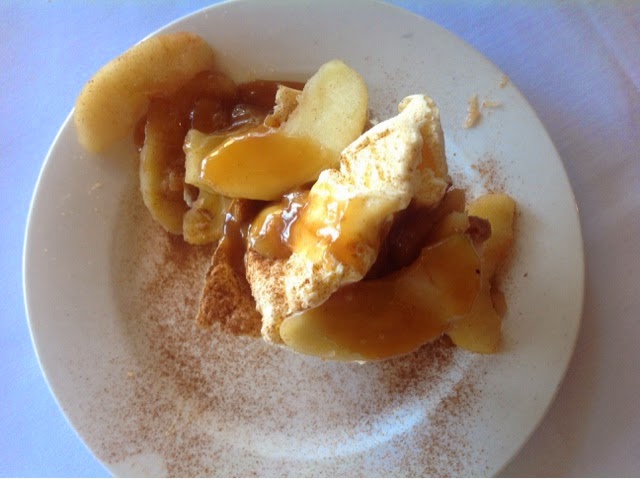 His...a flaky filo shell filled with vanilla ice cream, apples,
warm caramel sauce, dusted with cinnamon.
This was a great choice for Chuck and he never said a word while he ate it.
So caught up in the deliciousness.

After lunch, we headed for our intended destination,
the beaches in Stone Harbor.
I read that the ocean was frozen in Stone Harbor
and I wanted to see it.
Stone Harbor is about 1 1/2 hours south of us,
but the hubs did not mind, he never minds...
but I'm sure he could have cared less.
None-the-less, he was so happy to take me.

When we arrived in Stone Harbor... 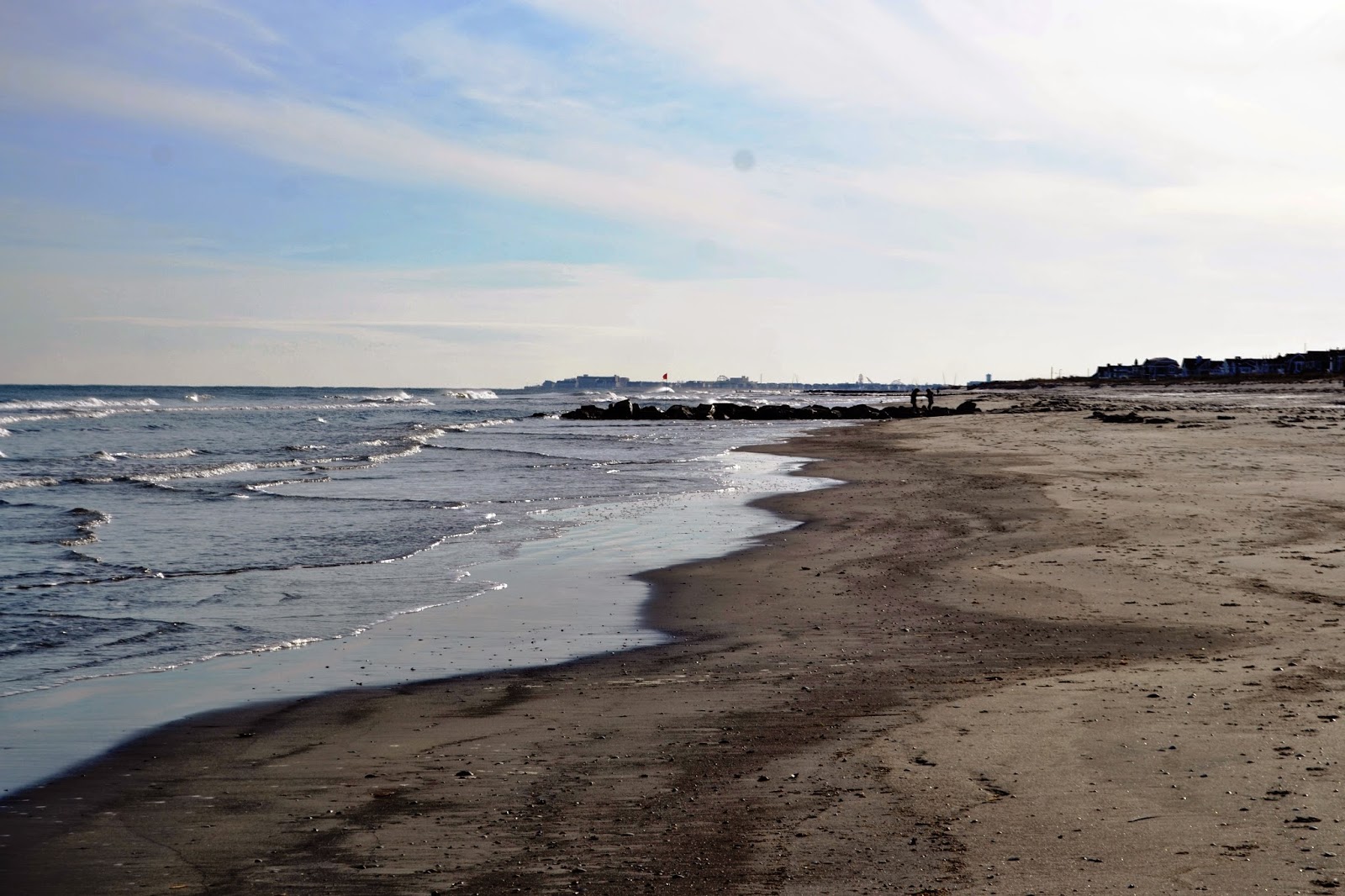 the ocean had thawed and there was no ice to be found.

I am not a quitter you know, I got right on my I-Pad
and did a little research and found
that if we traveled another 15 minutes south,
the ocean at Sunset Beach in Cape May was still frozen.

I was in, the hubs was in...we had traveled this far,
so back into the car we went and we were off to Cape May.
There was a little sea glass searching in Stone Harbour
which resulted in "one" brown piece.
That was not encouraging but I am not easily discouraged.

When we arrived at Sunset Beach...it was the success I was looking for
and the hubs was quite relieved... 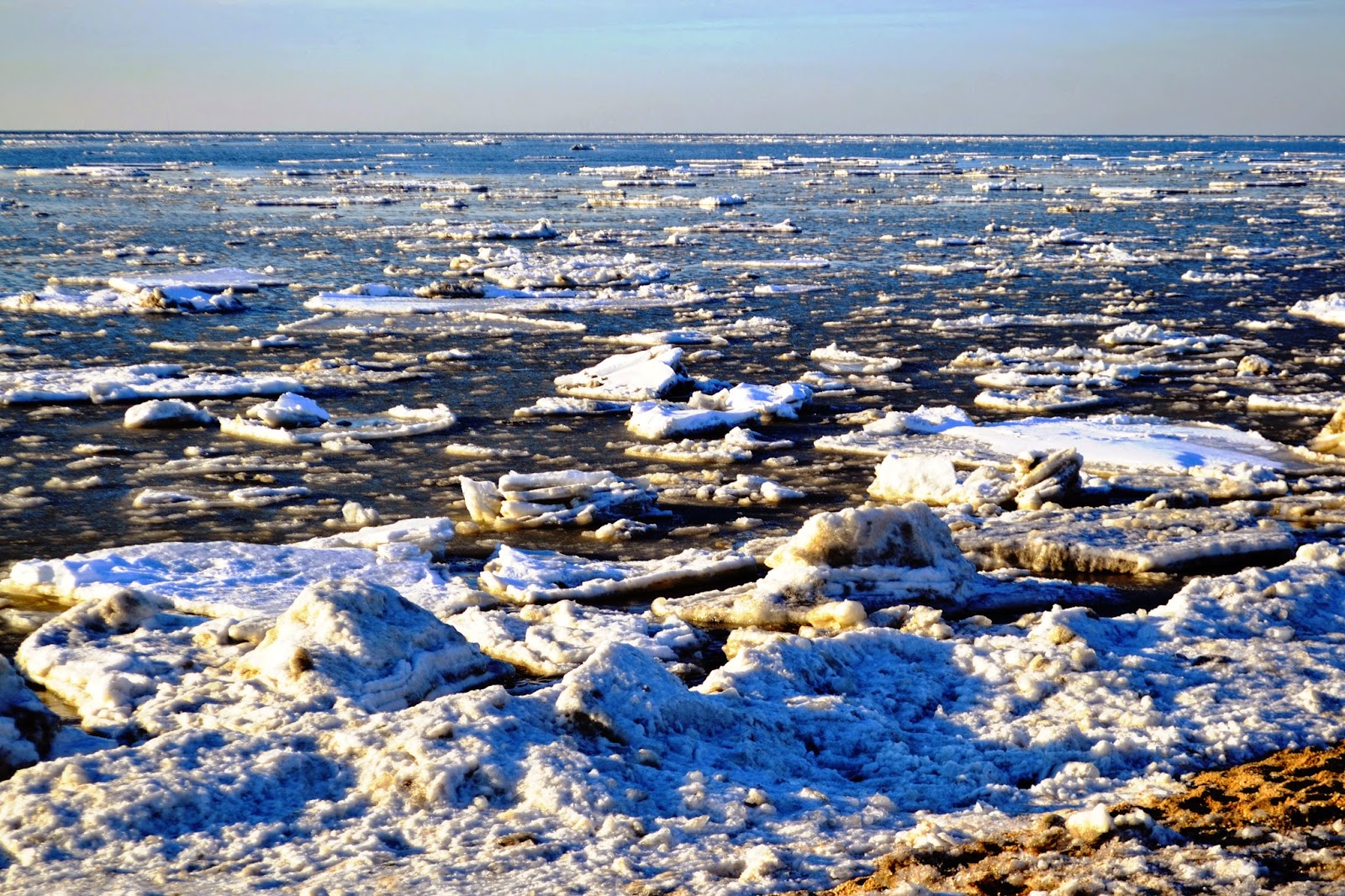 The Atlantic Ocean frozen but thawing. 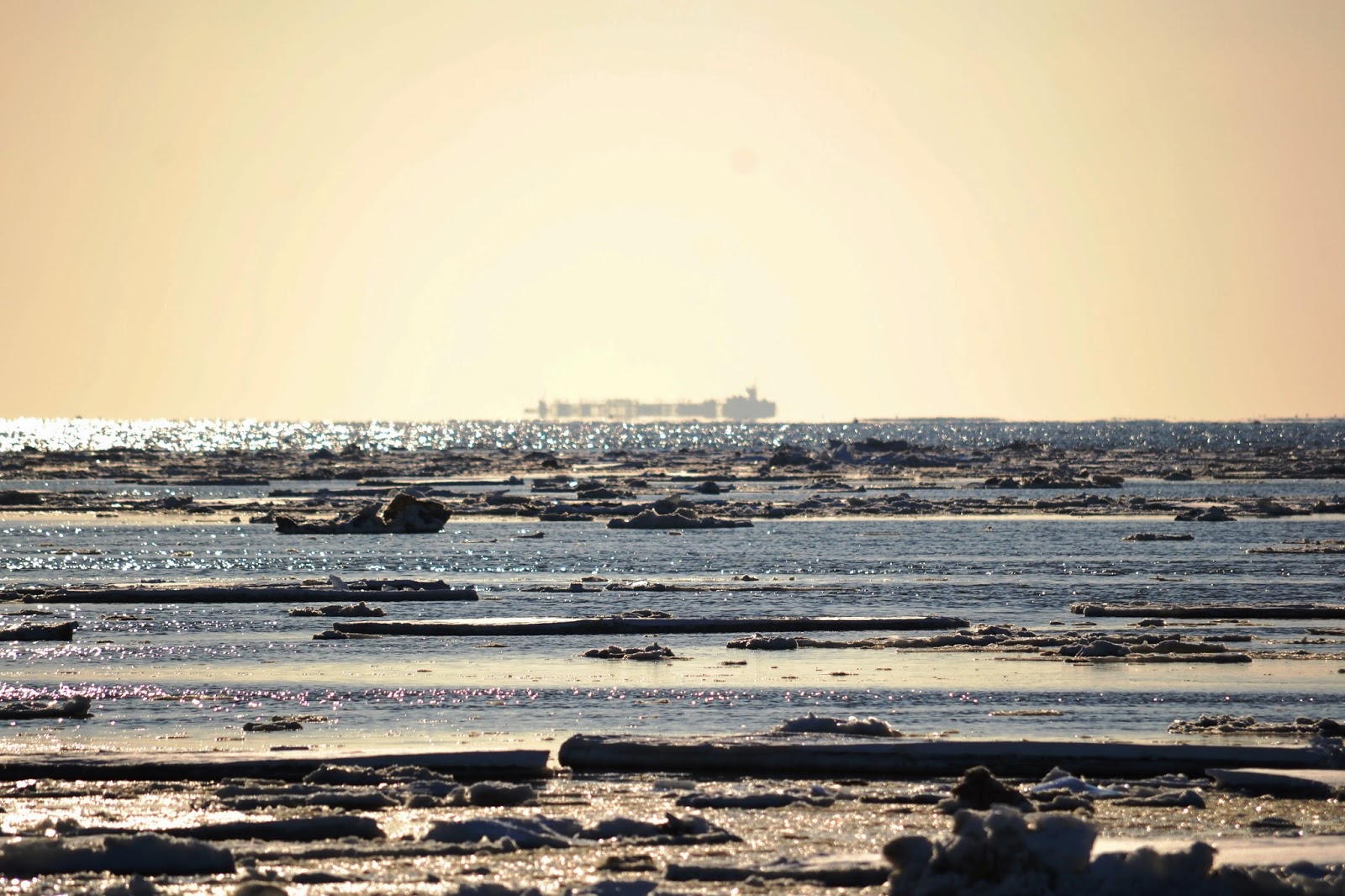 It looked like a sea of icebergs, floating gently with the tide.
It was amazing! 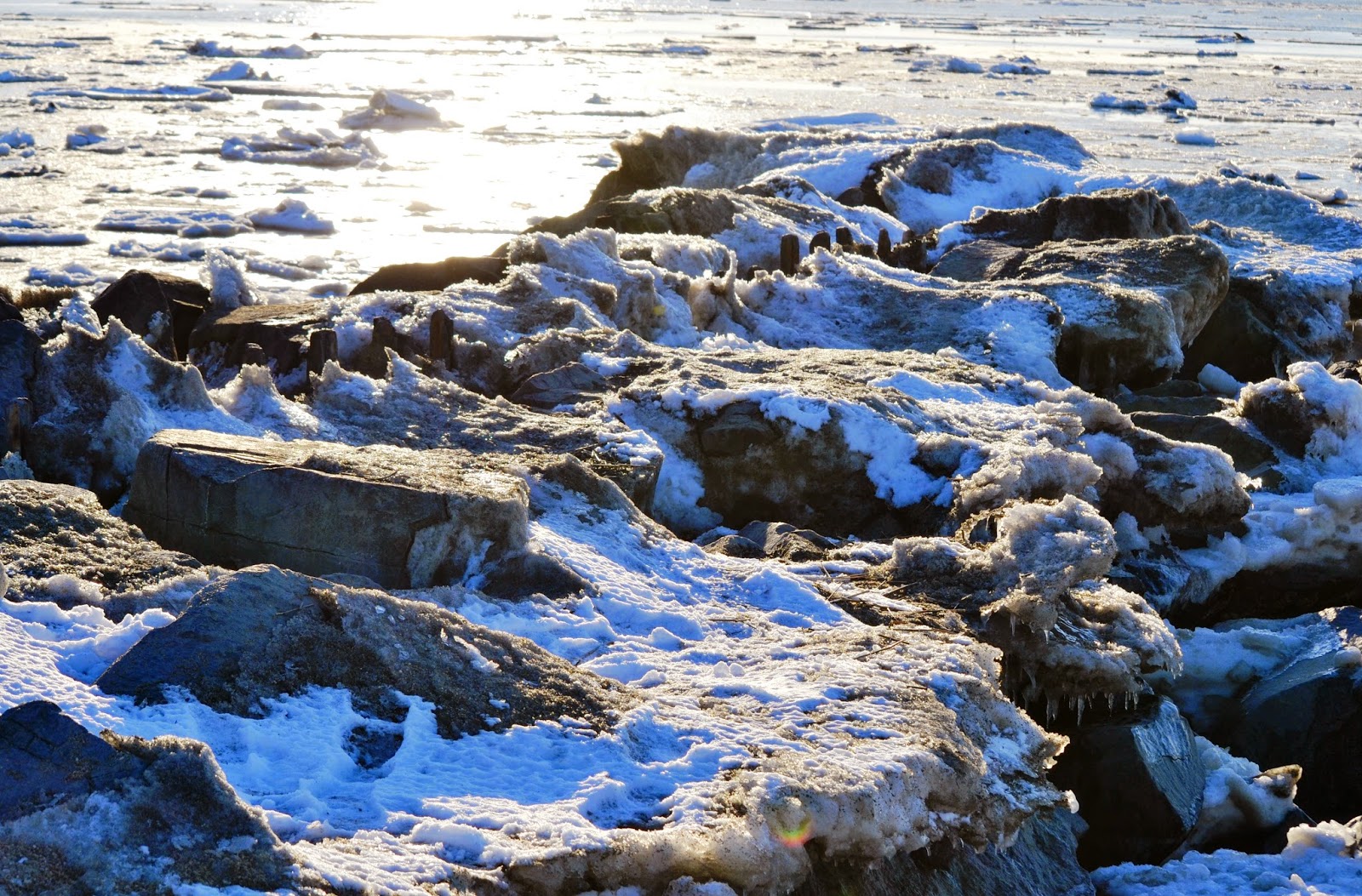 It was an awe inspiring sight, the ocean rarely freezes,
this may have been a once in a lifetime opportunity to see it! 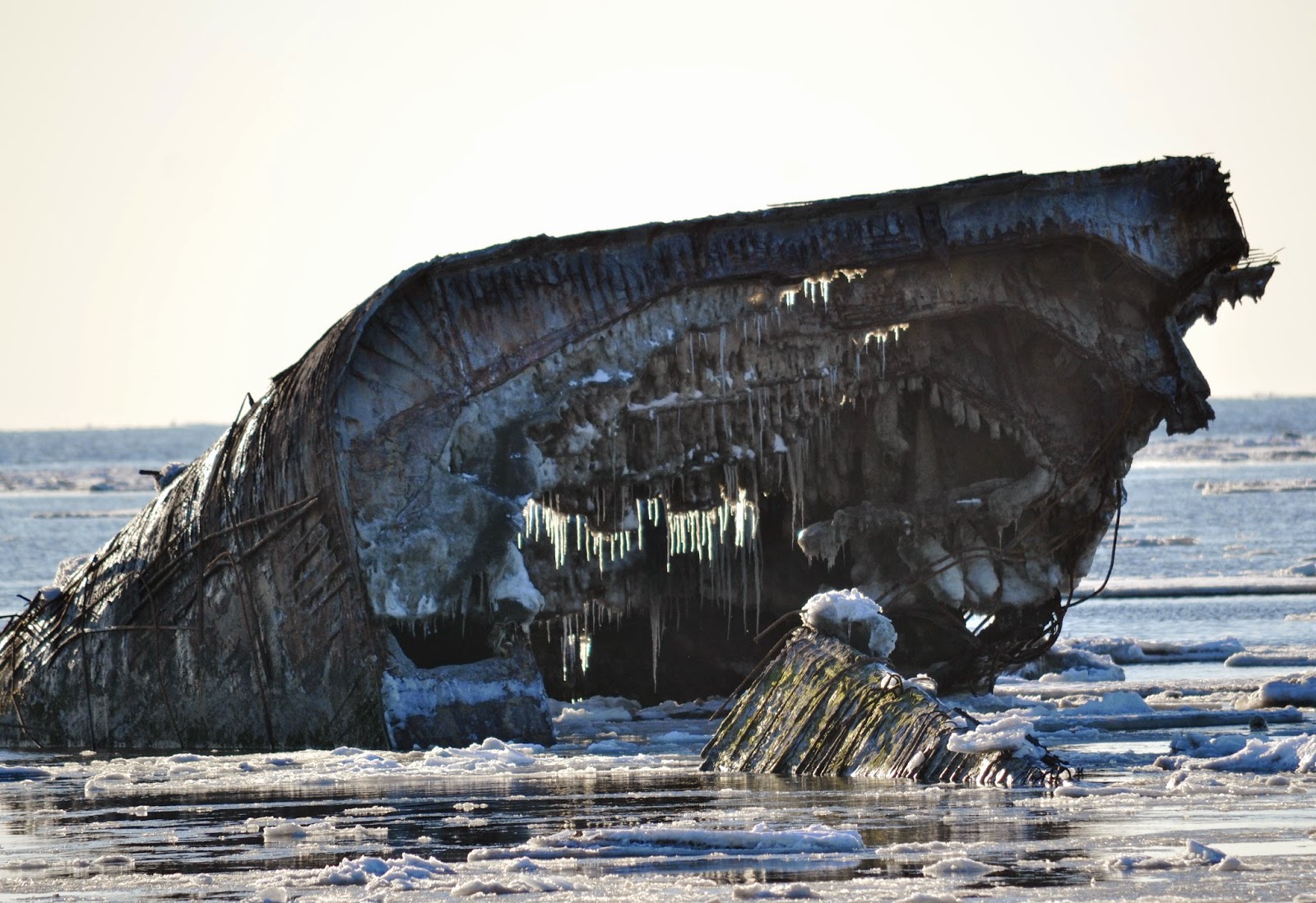 There is a sunken concrete ship at Sunset Beach
and it was filled with icicles. 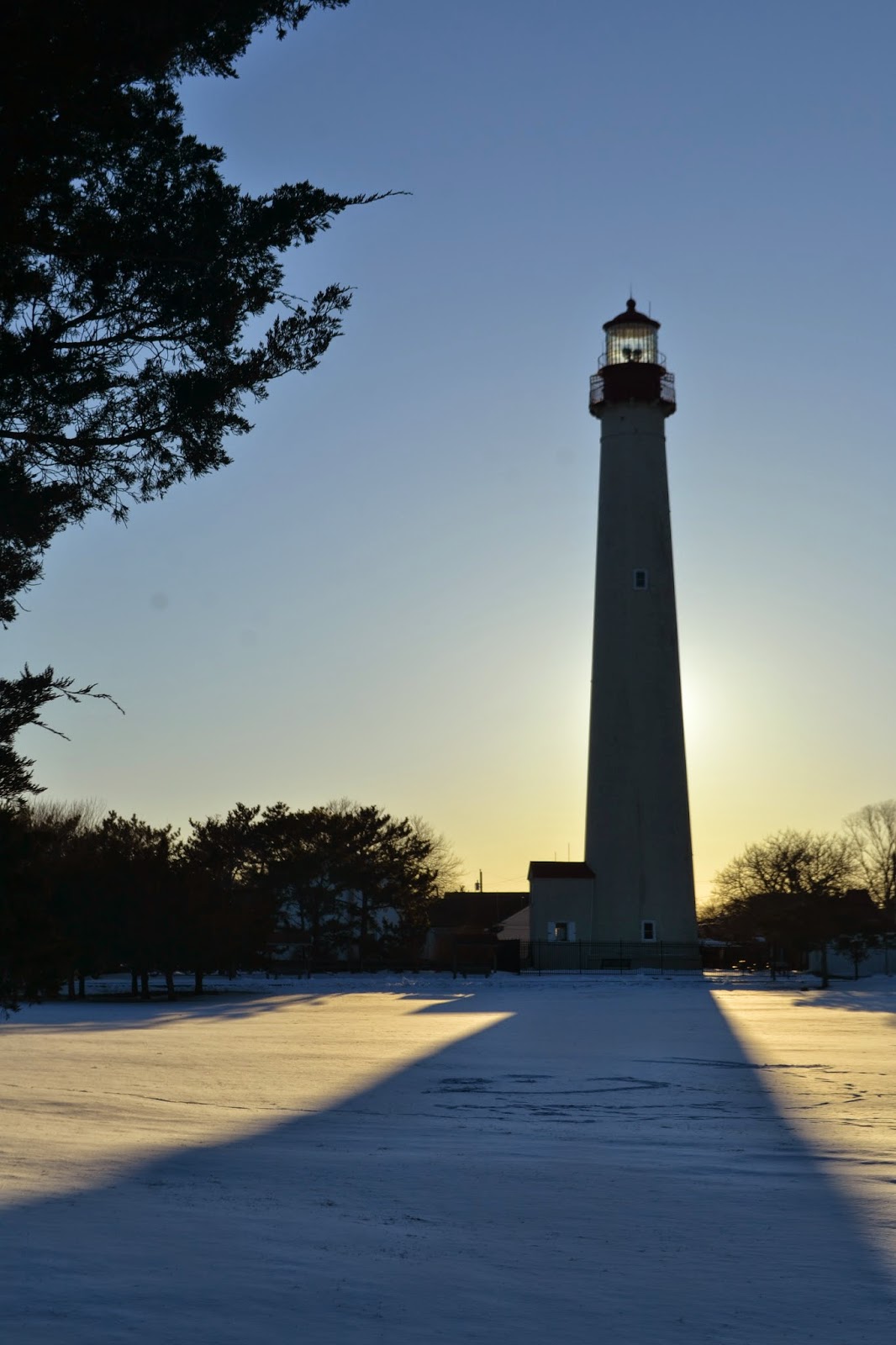 We went to see the Cape May Lighthouse and Chuck took
this amazing picture for me.
I was so cold and so tired, I could not even get out of the car.
He was so happy to tell me of his "one third" skills for photography.

I guess he does listen to me!

Love all the pictures and what an amazing site to see the ocean frozen.

Great pics of the frozen ocean!

Looks like Georgian Bay a few weeks back! (Now it's just completely white). Lovely lighthouse too. Good picture he took!

Looks like a beautiful adventure, my friend :) The photos of the frozen ocean are quite beautiful and that fire looks so warm and cozy.

Happy Monday to you, Debbie! Hugs!

Happy March, Debbie.. sounds and looks like a delicious weekend.. The desserts are both yummy! I would enjoy either one of them too. I love the ocean and icebergs photos, a neat sight to see. And the Cape May Lighthouse is beautiful. Great captures.. Enjoy your day!

What amazing shots of the icy sea and that old shipwreck!

How wonderful, Debbie! I had never heard of the ocean freezing, wow!
Love the pics, and so glad you were able to go. Rest up now, so you'll
be able to go on another adventure soon. xoxox

I haven't been to Smithville in quite a while -- I do like it, though. Yes, the ocean rarely freezes, but we've had some really frigid weather. Glad you had a good time -- and Chuck's photo is gorgeous!!

great lighthouse shot, chuck! love the beach scenes, too - both frozen and thawed. now, for the desserts, both sound excellent, but i'd have to go with your choice this time!

Well if it's frozen lakes and even our muddy Mississippi freezes in places, Minnesota is the place for you! Yikes, far too much ice, but we get that a lot! Today's the last day for fish houses on any lakes without being fined and perhaps hauled away. Thank you for such a fun ride along with you both too, it's always exciting.

Stunning images! Since I'm land bound, I'll have to enjoy the frozen ocean through your lens!

Magnificent images especially seeing the Ocean frozen. That is amazing.

mmm...more about the snacks. mmmm

Love the ocean views, and the desserts look yummy!!!!!!!

How fun! I love the sand sculpture! The ocean shots are gorgeous! His lighthouse photo is fantastic! Nice application of the Rule of Thirds!

fabulous outing, unbelievable food and what a sweetheart of a hubby to take you to find the ice.

You had a great outing and all your photos are fantastic, including Chuck's shot of the lighthouse. Those desserts looked very yummy. Great post Debbie!

I'm glad you had a good adventure with great pictures. You taught your hub well, he took a great picture of the lighthouse. I was told once that the salties ocean was the Atlantic so I thought it could never freeze but you came back with proof.

Debbie I forgot to mention about the sea glass. One of your earliest post you wrote about sea glass I never heard of it & I live 15 minutes away from the ocean so I looked it up & I was amazed how it's formed takes years, comes from trashed bottles thats been thrown into the ocean which is almost coming to extinct cause of plastics. Im always searching for it now but not much luck.

Wow - you had a terrific outing! LOVE the Lighthouse photo!! :)

if you check back here, i don't know if you do, but here's a link to a post i did on sea glass.

the ocean can freeze, it the water temp falls below 28 degrees. i don't think it happens often, i had never heard of it.

Sounds like a wonderful day! I wish I lived that close the ocean. :( Anyway I love the pictures and seeing ocean frozen like that is pretty cool!

Props on that lighthouse pic! So lovely! And even though I see the pics and believe you, it's very hard to wrap my head around a frozen ocean...one of the reasons Alaskan cruise is on my {don't really have one} bucket list!! HUGS!

P.S. No pic of you napping on the drive home?

I believe it was the April 5th 2013 post that I first found out what seaglass was so thank you for that post.

Nice Karen, it seems I have done quite a few posts on sea glass, I'm so happy you have enjoyed them. It is very difficult to find now, with the increase of plastics and recycling, i don't find it like I use to. I do have a pretty size able collection!!

My dear friend, what a wonderful hubs u have! I do believe that lighthouse is THE lighthouse, as I personally call it: the first lighthouse I ever physically touched :) Now, Smithville ... when I was in that area circa 2006-ish or so, I was staying in Absecon and I planned on going there BUT was distracted (nicely so!) by an interesting drive that was literally a U shaped drive out on to the ocean you could take in your car! get out and take pictures! it was quite breathtaking! Ahhh, Smithville someday I suppose -- ty for filling me in :)

Amazing to see the frozen ocean - wow!! So 'both of you' to go a'hunting for it as well.
Chuck did a fabulous job of the lighthouse photo :D)
Great desserts too - what a treat!