I starting collecting sea glass when I was about five years old. Big jars of it, small plates of my favorite pieces, I have saved every single shard. Saturday we went to a Sea Glass Festival in Long Branch, New Jersey. I have never been to one before so I had no idea what to expect...it was really fun!!
They did not allow pictures of the exhibits which were primarily jewelry made with sea glass. There were also vendors selling note cards, poster pictures, calenders and books, all displaying beautiful, unusual pictures of sea glass. It was super fun to be in the company of people who enjoy collecting as much as I do!! 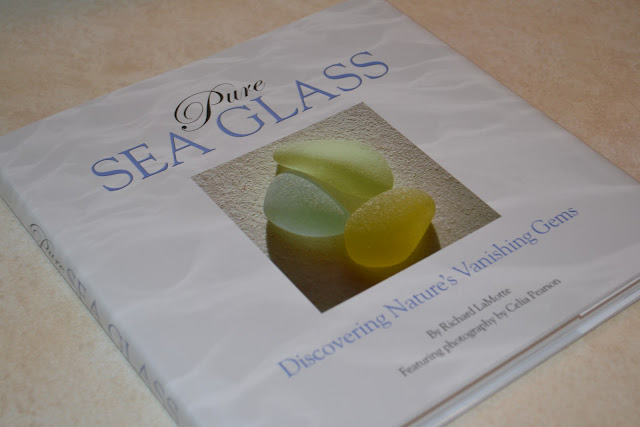 I purchased this book and immediately thought of my friend Bonnie,
who loves books and has such a passion for reading!! 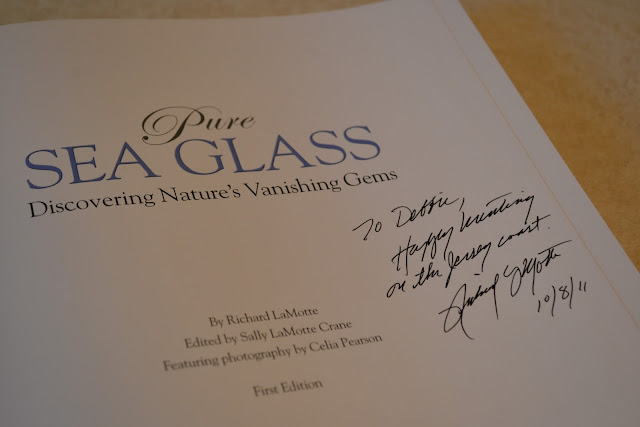 The author, Richard LaMotte was there and signed it for me!!
A Signed, First Edition...pretty exciting, right!! 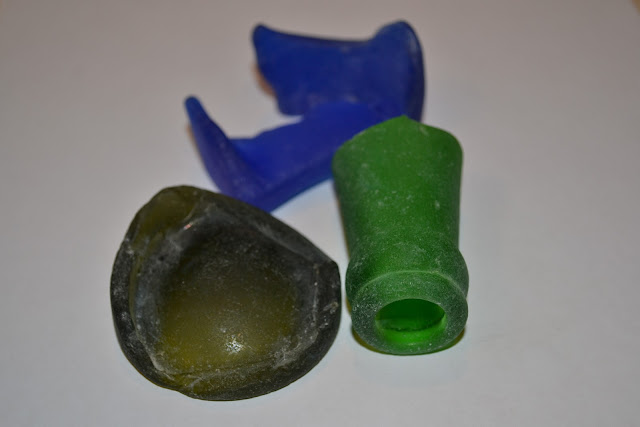 These are some of the more interesting pieces I have.
Richard identified the green bottle bottom as being from 1850,
that was exciting. The other pieces, although pretty, were considered common!! 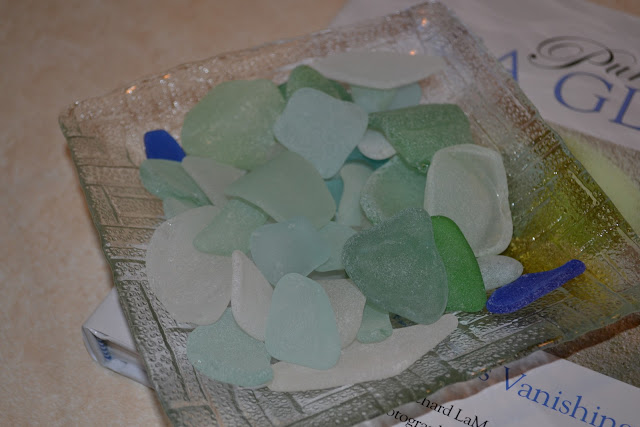 This dish holds some of my favorite pieces!!
Sea glass is also called beach glass or mermaid tears.
Sea Glass is a shard of glass that has been tumbled naturally by the waves of the ocean.
It can be found on almost any beach around the world. 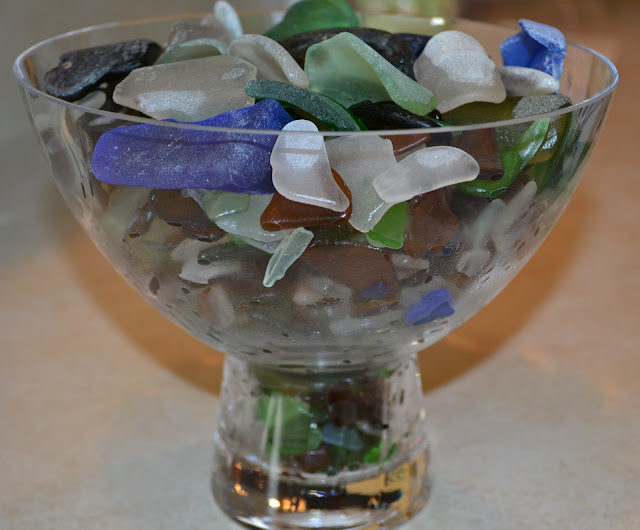 This large jar holds a large variety of pieces,
all different sizes and colors!! 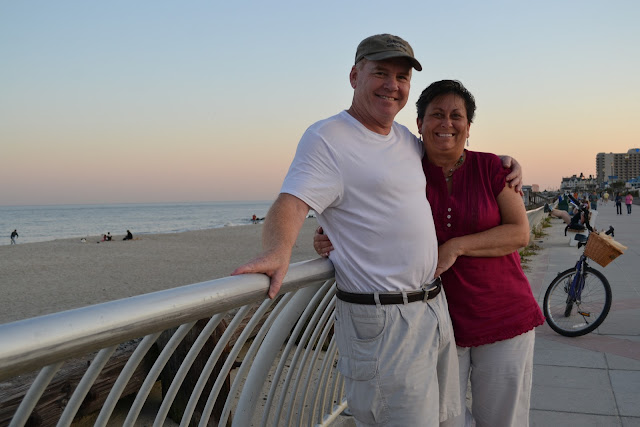 Long Branch is on the ocean,
after the festival we rode the bikes up on the boardwalk!! 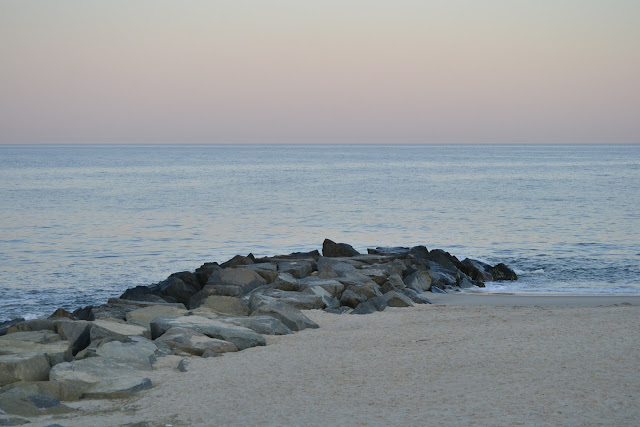 It was a beautiful, peaceful evening!!
Posted by Debbie at 8:43 AM

And she loves sea glass as well! I know the book must be beautiful. I always look for sea glass when on the beach in Florida. I have yet to find any..... Bonnie

Oh Debbie! You have a wonderful collection of sea glass. I'd love to run my fingers over every piece. Nice score on the autographed book!

You have some lovely pieces of sea glass there - the colours are lovely.
That beach looks very peaceful it must have been nice to cycle along it.
Fun day!!

What a neat collection!

Another wonderful post Debbie and always enjoy photos of you and your hubby. I've never thought much of sea glass before but I am now. The ones you showed are so pretty. Next time I go to the beach I think I'll start looking.

Your post makes me want to go to the beach and look for sea glass! Beautiful photos!

I have a couple of necklaces sea glass. I love it! You have a great collection.

a friend of mine that grew up on Long Island has collections of sea glass displayed in her Dallas home too. :) if we can all turn out as lovely after being tossed and turned by life's waves...

I adore sea glass! I always look for pieces when at the beach. Yours are excellent!

No wonder you collect it...it is beautiful.

hello debbie...i left you a message on your cellphone last week but didnt hear back from you. i see everything is fine...didnt we have just a wonderful weather weekend here...took bruno to the beach on sunday...call me...i want you to come out with me and bruno...xoxo barbara

You have a beautiful collection, Debbie! And that book looks like a nice one! Neat how the author signed it for you. :)

I love sea glass as well. What a beautiful collection you have.

We were on the California coast a few years ago. There was a beach called Broken Glass Beach. Years ago it was where they would take the garbage out to sea...and the bottles broke up so know it is full of broken glass...or Sea Glass! Never found anything a pretty as what you have!!

I like to think that some of that glass was handled by bootleggers in the 1920s -- very cool collection, Debbie. Love the colors. :)

It IS beautiful. I like the smooth feel of something that has been worn down by time but still holds its beauty. Too bad people can't age that well. The festival must have been super fun.

I love beach glass too Debbie. I have been meaning to make some jewelry with it someday. Your collection is very pretty.

Wow! I just may have to begin a new hobby. And that last photo is gorgeous!

Oh i think it is great! Next time i'm at the beach and i see some glass i will think of you and take it and sent it to you!!!!

Oh how exciting I absolutely love sea glass you have some nice pieces there. I went to Vancouver and Victoria twice and have some. If I lived on a beach I would probably never leave it.
I try to find pond glass but it is probably not near as pretty. :) B

You really have some beautiful pieces of sea glass. I went to a beach once where there was so much of it in a place that was like a natural rock polisher. I need to go back and tell my self I will. Too bad they wouldn't let you take pictures. It looks like a wonderful day.

I really want to go to the beach. I guess I need to move. Your sea glass is very pretty.

From trash to beautiful treasure...I didn't know about sea glass until now! Thanks, Debbie.

The sea glass is beautiful, what a great collection. I noticed while in Bermuda there were several Sea Glass beaches. We didn't have time to stop to find our own collection.