Yesterday when we were in Pier Village, I saw hundreds of migrating monarch butterflies. What a thrill, something I have never seen before. They were everywhere but primarily flying above us and landing only occasionally. Those landings were brief.  They are fourth generation monarch's on there way to Mexico and California. 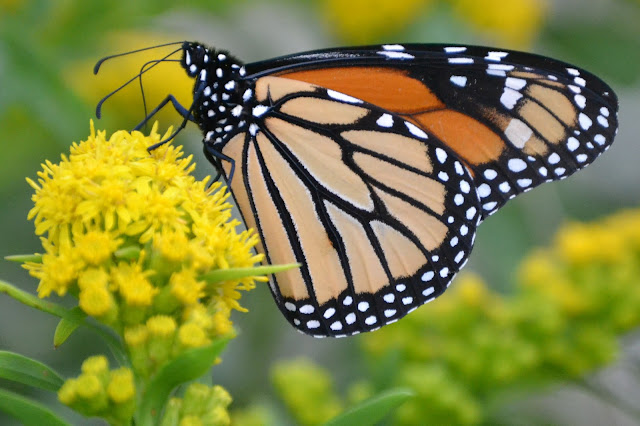 Some people think Monarch's are the most beautiful butterfly. 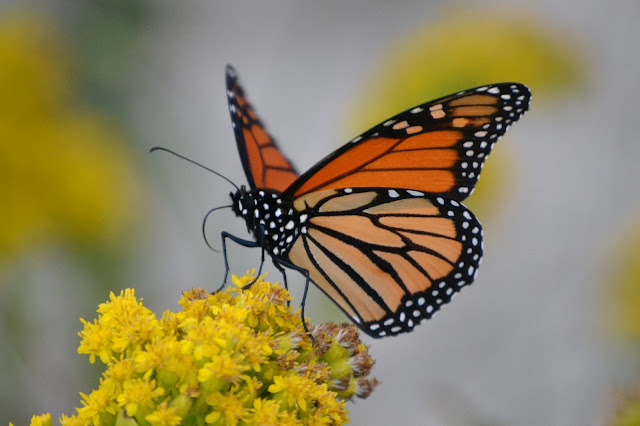 They are considered "king" of the butterflies, hence the name "monarch". 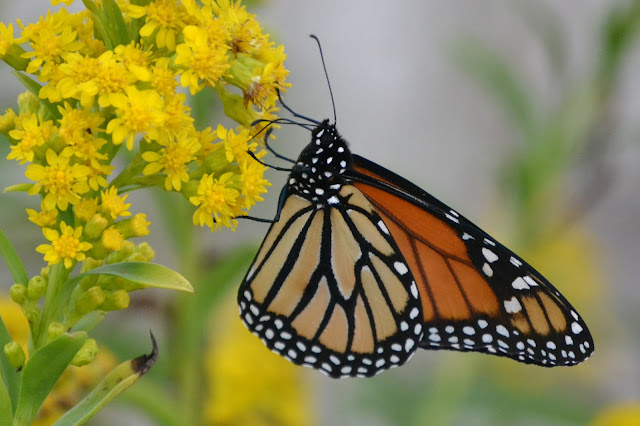 I think they are the most recognized butterfly. 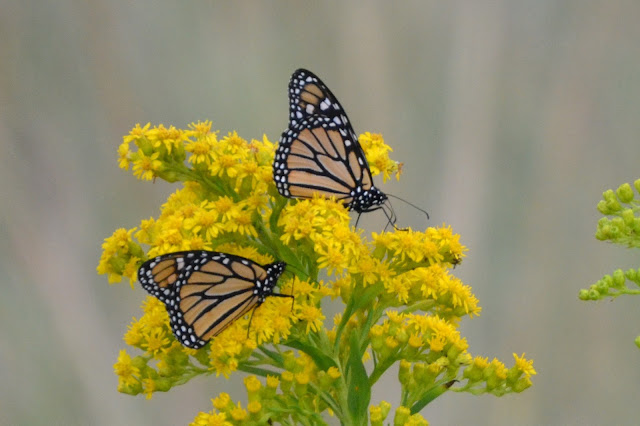 They rarely landed but when they did, it was to enjoy the goldenrod. 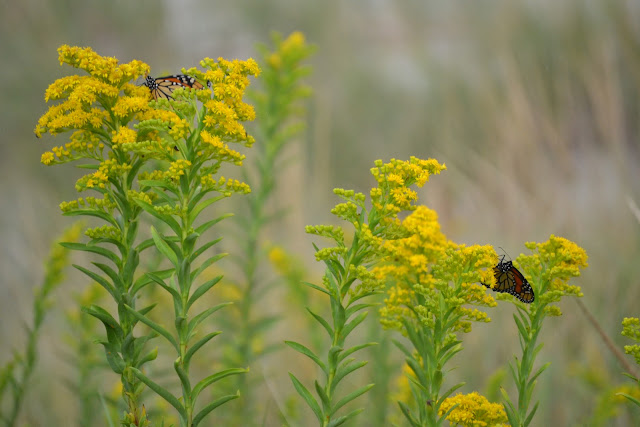 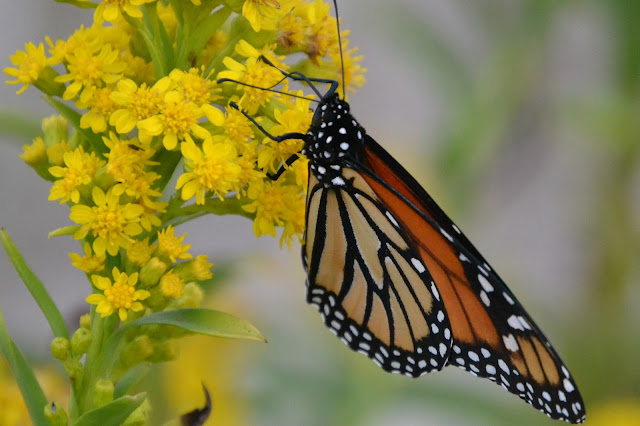 I took over 50 pictures in a matter of minutes. 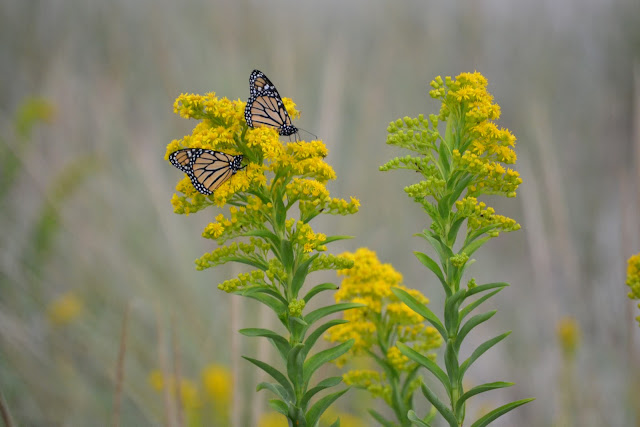 If anyone is interested in more information, you can find some great monarch facts here.
Sharing with Mellow Yellow Monday

Great pictures of those beautiful butterflies. You were so lucky to see them. They look lovely next to those yellow flowers.

Beautiful close ups! Sounds like an amazing experience to see all those butterflies.

Bella Vida by Letty
Have a great day.

Oh my goodness, Debbie, these are fabulous shots! What an awesome experience that must have been to see them all! And I thought I was lucky when I saw a bunch of them on that dirt road in July... Very cool shots! =)

Debbie! These are beautiful!
I love this butterfly.....a few years ago the kids and I did a science project on them and we hatched them. (Is "hatched" the right word?;) I guess I should know being Teacher and all;)

And FLUFF is wonderful! (Although I wouldn't call yours fluff at all!!!) Just think what our pillows would be like if there was no fluff and just "depth". Headaches every day;D
Have a wonderful SUnday Debbie!

love these. the 2nd shot is my favorite.

Oh Debbie,these pictures are fantastic.Having them on the Goldenrod is perfect.

Thanks for posting the monarchs and the link to more info. We've been privileged to see several cycles/generations in our garden this year, thanks to the self-seeding milkweed plants. From egg to caterpillar to chrysalis to butterfly...love them all and will miss them this winter. What a treat to see their migration!

Stunning Debbie! I have never captured a photo of a butterfly, I'm never fast enouh!

Oh Debbie. These are some of the best monarch photos I've seen. We used to have lots of them around when I was a kid, but I've only seen one or two a year for the past 20 or so years. Sigh. Your photos made me remember the stained-glass majesty of these beauties. They are very well named!!!

What GREAT pictures. They are beautiful!

Oh, these are lovely, Debbie. I'm so happy you got to see the migration. :)

Gorgeous! I havent seen so many in one place. They are just Gorgeous!

Wonderful Debbie! What a fun experience. Thanks for all the interesting facts too :)

Hi Debbie, the Monarch is a beautiful butterfly. I was just trying to capture a butterfly this afternoon while keeping my hubby company while he was grilling. I don't know what kind it was, guess I'll try to find out online, but he was pretty! He never stopped fluttering his wings, so a good shot was close to impossible! Off now to see if I can find out what kind he was... Isn't photography fun! We discover all kinds of new and interesting things!

They are beautiful you should link them to mellow yellow Monday. are you still having trouble posting on my blog?

I came over from Jill's blog. What a treat to see all those monarchs. Your photos are stunning!!! Beautiful captures. Mickie :)

These are wonderful! I bet I didn't even attempt ten photos of butterflies this summer.

Awesome shots! They're so quickly gone!

Monarchs seem to open and close their wings more slowly when they're landed on something. I think it's because they know they are the prettiest and they like to show off!

I love Monarchs they are my favourite. Incredible shots Debbie B

How cool, it must have been a pretty sight to see so many Monarchs at one time. Your photos are beautiful. Have a great day!

My MYM at Etcetera Etcetera blog, have a great week!

These are just amazing! I think I love the last one the most ~ something romantic about it...hope your week's off to a great start!

Exquisite photos ~^_^~ Thanks, namaste, Carol ( A CreativeHarbor) linked with MYM

Again.. blown away by your pics... what camera are you using?